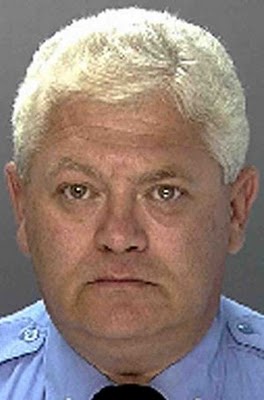 Killer cop coward Aleksande Shwarz was finally fired after a 21-year reign of terror as a perjuring, framing, assaulting, and murdering Philadelphia police officer. Shwarz was the recipient of dozens of formal and informal citizen complaints, all of which were criminally covered up by Philadelphia’s corrupt joke of a police department.

In 1992, Shwarz shot his minor cousin, Alexander Vetenshtein, over a petty family dispute. According to a news source, Vetenshtein died several months later as a result. In 2007, Shwarz fatally shot 15-year-old Ronald Timbers for the “crime” of holding a clothes iron. City taxpayers have reportedly paid over $2 million just to settle civil suits filed against Shwarz.

Note that Shwarz was terminated only because one of his last crimes as a policeman – the false arrest and aggravated assault of a U-Haul manager in 2010 – was caught on video (google his name to watch it). All of the cops who were present tried to cover up that violent felony, but video recordings speak louder than do the typical lies told by Philadelphia’s cop thugs. Shwarz was eventually arrested for that crime, although he was grossly undercharged. He was ultimately convicted and sentenced to one to two years in prison and six years probation.

Of course, Shwarz is merely the tip of Philadelphia’s police-crime iceberg, as per a 2004 prosecutor’s study which suggested that almost all of Philadelphia’s criminal cops are immune from being fired, much less arrested.