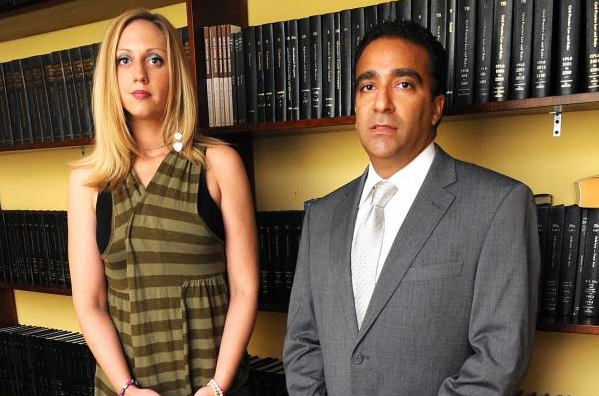 Pamela Held glanced up at her rearview mirror and saw red and blue flashing lights.

“What did you do?” asked her friend sitting shotgun.

“Nothing – I have no clue what this is about” Held replied.

Before too long five road pirates had surrounded the vehicle. “Where are you coming from? they demanded.

Held indicated they they had left a friend’s place and offered as evidence to Sean Christian of the NYPD outfit her cellphone and password.

Held was then caged because she was found with a substance some of Christian’s colleagues said she could not have.

Three hours later Held was released from the confines of the cage and given back her property. As she left the gang’s compound, Christian stalked her. Held recalls: Held – who obviously didn’t feel safe in the presence of someone who already proved to be an aggressor – left the area. Shortly after she looked at her phone. From the NYDailyNews.com:

She counted 20 nude photos and five sexy videos of her that had been forwarded to the phone number. Fearing the worst, she contacted lawyer Richard Soleymanzadeh, whose private investigator traced the mystery number on Held’s phone to Christian and learned he was a cop.

Christian – at least if what Held says happened is accurate – is not just stealing her coin to “protect” her, but also violating her privacy to a severe degree.

One must also realize that, for arguments sake, even if Held’s claims about Christian are not true – one cannot argue against the fact that Held’s freedom of travel was prevented and her person caged for actions that caused no victim.

At most Held had failed to pay a ransom said to be owed at a regular frequency and she had a substance that some other strangers claimed the right to prohibit. What right did Christian or any of his comrades have to treat her as such?

Would you ever do that to someone?

Held is collaborating with Richard Soleymanzadeh to try to obtain justice through legaland. Woman, 27, to sue NYPD after police officer ‘stole nude photos from her iPhone that she took for her boyfriend’ at the DailyMail by Suzannah Hills

H/T Strike-The-Root.com – There are a thousand hacking at the branches of evil to the one who is striking the root