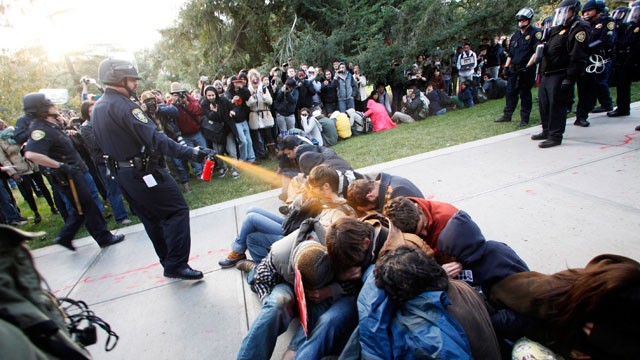 ‘NoLongerSupportGovernment‘ submitted the following post, beginning with an article from the Associated Press.

The former police officer who pepper-sprayed students during an Occupy protest at the University of California, Davis is appealing for worker’s compensation, claiming he suffered psychiatric injury from the 2011 confrontation.

John Pike has a settlement conference set for Aug. 13 in Sacramento, according to the state Department of Industrial Relations’ website.

Pike was fired in July 2012, eight months after a task force investigation found that his action was unwarranted.

Online videos of him and another officer casually dousing demonstrators with pepper spray went viral, sparking outrage at UC Davis leaders. The images became a rallying symbol for the Occupy Wall Street movement.

Hackers posted Pike’s information online. He received scores of threats that led an Alameda County Court judge to rule against releasing the names of other officers at the scene.

This week, a state appeals court ruled news organizations are entitled to know the names of a dozen University of California police officers who were interviewed about the use of pepper spray on demonstrators at UC Davis.

The Los Angeles Times and The Sacramento Bee are seeking the officers’ identities, which were redacted from two reports on the incident.

In the aftermath, the University of California agreed to pay $1 million to settle a lawsuit filed by demonstrators and the chief of the UC Davis police department resigned.

So there you have it. The criminal cop applies for welfare benefits since he’s been fired as a cop.

If he can’t derive a huge paycheck for being hired government muscle, he wants welfare at our expense. Typical for many cops.