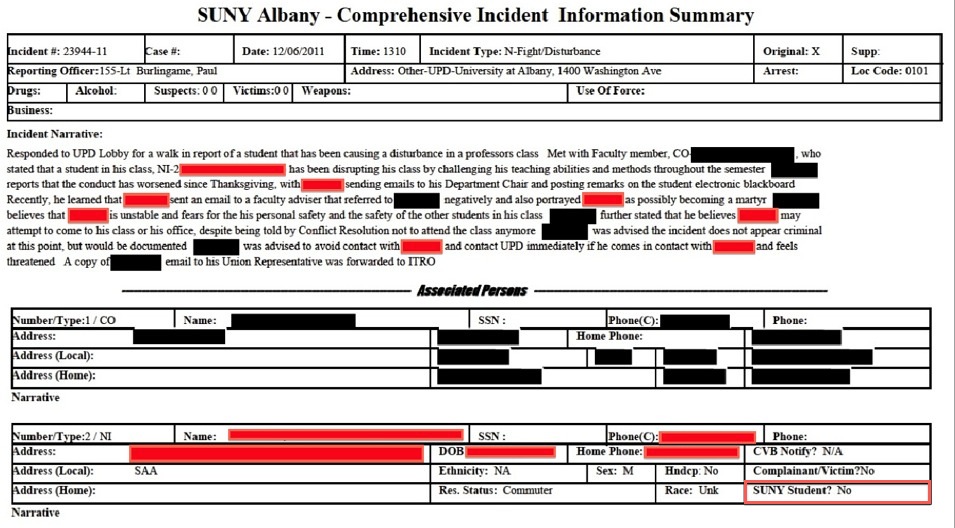 At the State University of New York at Albany, the armed SUNY police are free to file false police reports, e.g. to assist even a mere visiting assistant professor in retaliating against a student victim and whistleblower who’d reported said professor’s academic dishonesty, sexual harassment, and retaliation. The day after the professor had been tipped off that he’d been reported, the professor filed a demonstrably false police report claiming the student was “unstable,” perhaps wanted to become a “martyr,” and was an imminent danger to the professor’s “personal safety” and the safety of 160 or so students… in a class that was likely empty. The degree to which SUNY police in general are corrupt and incompetent is a matter of public record, as seen in NYS Senate testimony cited and linked at http://minervawept.blogspot.com

The U.S. Department of Education’s Office for Civil Rights (OCR) is evidently OK with UAlbany’s coercive prior restraint on freedom of speech, inquiry, association, etc. without due process. OCR has so far refused to justify their determination or to respond to FOIA requests for UAlbany’s response to the complaint or for OCR’s deliberations over their serious potential conflict of interest in the case. https://www.muckrock.com/foi/united-states-of-america-10/us-dept-of-ed-ualbany-communication-re-ocr-case-no-02-12-2157-4876/

I’d like to see these problems handled through the system and for the system to actually administer justice rather than continue to let dirty cops (and others) stomp all over students’ legal and constitutional rights. When I was at UAlbany, some women there told me they were afraid to report bullying and sexual harassment by professors and they saw my experience as justification of their fears; victims and whistleblowers should not have to live in fear. Please consider asking the new Moreland Commission on Public Corruption to address the problems involving the dirty SUNY police? Please consider asking the Government Accountability Project to take this case on if the Moreland Commission or others in government won’t? Going the extra mile and contacting the U.S. Department of Education about investigating UAlbany and not giving them a mere slap on the wrist would be especially appreciated. Readers are welcome to try contacting anyone else they think might help.