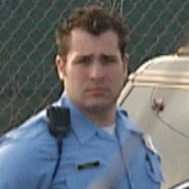 Philadelphia police officer Eric Burke is the definitive embodiment of a psychopath. He is an inept, sadistic coward who thoroughly enjoys brutally assaulting innocent taxpayers (who ironically pay him for protection!) for the slightest non-criminal reason, such as making video recordings of him feloniously assaulting other law-abiding citizens! Burke has already cost taxpayers the better part of a million dollars to settle a myriad of brutality lawsuits filed against him; several additional suits are pending. Burke is the recipient of dozens of formal and informal complaints, all of which has been criminally covered up by what Amnesty International has suggested is the world’s most crooked police force. (Eric’s brother, James, is an equally complained-about Philadelphia cop thug.) To learn more about this dangerous, violent felon who masquerades as a legitimate cop, simply google the article “Why is Eric Burke Still a Philly Cop?“.

On Aug. 31, 2010, Fernando Echevarria was walking near the corner of York and Leithgow streets in North Philly when he saw Jose Vargas, a friend from the neighborhood, in the back of a police car. He stopped to check it out: Vargas’ face, he says, looked beaten up. Then, Echevarria claims, Police Officer Eric Burke told him to move along. He walked a few houses’ distance away; there, two women told him that Burke had “messed” Vargas up pretty badly.

As Echevarria watched — according to a lawsuit he filed against the city — Burke and another officer took Vargas out of the car, pulled his pants down and began an invasive public search. Echevarria took out his phone to videotape, but Burke approached, saying, “Didn’t I tell you to leave?” Echevarria says he turned to walk away, but Burke knocked him down, handcuffed him and scraped his head against the ground. Then, according to the suit, Burke stomped on his skull.

“What he did was wrong,” says Echevarria, who declined to further discuss the incident with City Paper. And it wasn’t over yet.

Burke placed him in the back of a squad car, drove about six blocks away, and told Echevarria to “get the fuck out.” Then, he says, Burke punched him in the face. A police van transported Echevarria, bleeding from his face, to Temple University Episcopal Hospital. He was treated for “abrasions, facial and scalp contusions, and 1.2-inch left-earlobe laceration.”

Here’s what Echevarria didn’t know that day: All of this had allegedly happened before.