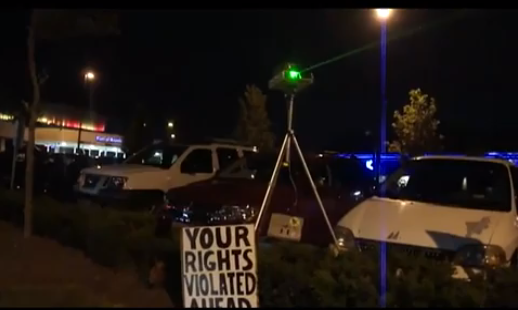 Bob Cunha, Manchester police employee, informed Bill Domenico that the threat his colleagues John Hopkins & MPD#52 had levied against Domenico was dropped, and that he was no longer ordered to appear in legaland.

I will be at Manchester, District Ct., 8th of August 2013 defending free speech. I have retained legal council and will fight this charge to the fullest extent possible. I would like to file motions in Superior Court. This will cost money. If you would like to support this effort, please go to the chip in at:

The green beam protects individuals from violations of their 4th amendment rights against warrantless and suspicionless search and seizure via police checkpoints.

As William Kostric noted two-minutes into the video below:

“What you’re saying is that you can seize private property on account of an ordinance . . . doesn’t that strike you as a little over the top?”

The one on the left is John Hopkins. The same John Hopkins Ademo Freeman was said to have wiretapped (despite the fact that Hopkins was at the time subsisting off stolen money and said to be a “public servant” and thus have no expectation of privacy, and despite the fact that he admitted that he knew of CopBlock.org, which seeks to bring-about police accountability). Does Hopkins have something against free speech? Or does he so unthinkingly just obey orders from others? Whichever is more accurate, he wouldn’t be someone I’d hire to keep my community safe.

Friendly, innovative, and someone who looks out for his neighbors, Bill Domenico is the kind of guy many of us would love to live around.

Over the past couple of years Domenico has successfully deployed his Green Beam Laser in/around Manchester, NH to give others a heads-up about area police activity, but that changed on Friday, July 29th, 2013, when a man wearing a badge threatened him for exercising his free speech.

After learning of an active DUI checkpoint on a bridge in downtown Manchester, Domenico had joined about 20 others to warn drivers about of the unforeseen fate that awaited them should they continue in that direction. After about 40-minutes of operation, during which time Domenico says a hundred cars averted their travel based on the heads-up provided, Manchester police employee #52 approached and asked if he had a permit.

The police employee pointed-to text on paper as the rationale for his demands – city ordinances 97.03 and 9.07 – and told Domenico that if he didn’t shut-off the laser he’d be issued a citation.

It’s clear the former isn’t relevant at all, and, as Domenico’s actions didn’t harm person or property, it’s clear the latter isn’t applicable. He, and no one else, needs to get permission from another to exercise free speech. Domenico sought clarification – was this an arrestable “offense”? He was told that it was not, that he’d be given a citation. Domenico communicated that he planned to keep the laser on and asked for the citation – noting that he’d fight it in court. Yet, after the citation was given to Domenico, the man making demands told him to shut-off the laser. He was told Domenico that if he didn’t comply his property would be taken.

Domenico asked whether the police employee would similarly seek to take down a sign hanging from a building after issuing the owner the same sign-related citation. The police employees’ response was that he would not attempt to take the sign in that scenario because he didn’t have the tools necessary, but that he would take his property as it was easily accessible.

Despite identifying this discrepancy, and after more back-and-forth, Domenico turned-off his equipment – recognizing that those who steal the property of others aren’t known for the safe care of such delicate equipment – and told the police employee that he’d see him in court, which is scheduled for:

If you have concerns about this attempt to curtail free speech by those employed under the guise of protecting rights, consider supporting Domenico in court or letting those at Manchester PD know your thoughts: