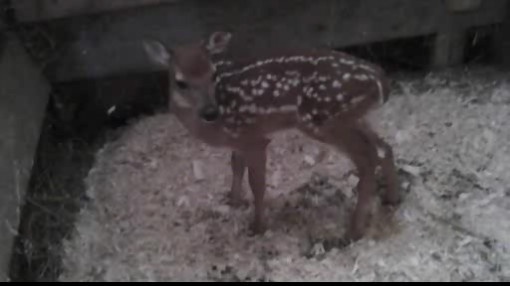 Two weeks ago, animal shelter employee Ray Schulze was working in the barn at the Society of St. Francis on the Kenosha-Illinois border when a swarm of squad cars arrived and officers unloaded with a search warrant.

There were nine DNR agents and four deputy sheriffs, and they were all armed to the teeth; Schulze said, “It was like a SWAT team.”

The focus of their search was a baby fawn brought there by an Illinois family who was worried she had been abandoned by her mother.

“When it made a little noise, it sounded like it was laughing,” Schulze said.

Schulze videotaped the fawn that they named Giggles during the two weeks she was there.

The Department of Natural Resources began investigating after two anonymous calls reporting a baby deer at the no-kill shelter.

The warden drafted an affidavit for the search warrant, complete with aerial photos in which he described getting himself into a position where he was able to see the fawn going in and out of the barn.

Agents told staff they came to seize the deer because Wisconsin law forbids the possession of wildlife.

Schulze told the agents that the deer was scheduled to go to a wildlife reserve in Illinois that allows the rehabilitation of deer the next day.

Still, Schulze said, agents corralled workers near the picnic area and then set out in search of the fawn.

“I was thinking in my mind they were going to take the deer and take it to a wildlife shelter, and here they come carrying the baby deer over their shoulder. She was in a body bag,” Schulze said. “I said, ‘Why did you do that?’ He said, ‘That’s our policy,’ and I said, ‘That’s one hell of a policy.'”

Supervisor Jennifer Niemeyer from The Department of Natural Resources said the law requires the DNR agents to euthanize animals like Giggles because of the potential for disease and danger to humans.

“Could you have made a phone call before showing up? I mean, that’s a lot of resources,” investigative reporter Colleen Henry asked.

In an attempt to justify the waste of taxpayer money to execute a baby deer, Niemeyer refers to another atrocity, “If a sheriff’s department is going in to do a search warrant on a drug bust, they don’t call them and ask them to voluntarily surrender their marijuana or whatever drug that they have before they show up.”

Niemeyer denied agents killed Giggles at the shelter, saying they tranquilized her and then euthanized her off-site.

Shelter president Cindy Schultz, who plans to sue the DNR for removing Giggles with not so much as a court hearing, said, “I don’t care where they would have killed her, it would have been wrong.” She also questioned what such an operation costs taxpayers.

Schulze said he has nightmares about the baby deer raid. He hasn’t moved her feed bowl or baby bottle.

The DNR told WISN 12 News despite the allegations outlined in its search warrant, it will file no charges against the shelter.

In certain circumstances, Wisconsin allows organizations to house wild deer, but only with a state-issued permit. In other words, all of this nonsense was not about the “potential for disease and danger to humans,” it was about sheltering the baby deer without begging for permission first.

I wonder how many of the agents involved felt good enough about what they did to go home and tell their spouses and children that they executed an innocent, harmless baby deer – one who was less than 24 hours away from being transported to a wildlife reserve.

320
SHARES
FacebookTwitterGoogleRedditTumblr
DiggLinkedinStumbleuponMailPrint
You Can Support Cop Block by shoppping on Amazon using the banner below:
BANNERS ARE CLICKABLE