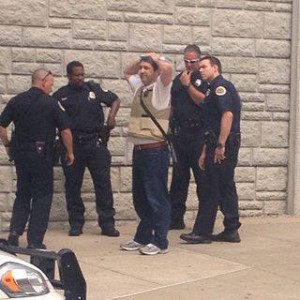 Video 1, First detention at about

Video 2, Second detention at about

On 7-29-13 starting at about 3:00pm I passed out leaflets stating, ““… the right of the people to keep and bear Arms, shall not be infringed.” It is the Second Amendment to the United States Constitution. In downtown Nashville, I openly carried a molded kydex rifle case on my back while wearing a ballistic vest. I purchased the ballistic vest because Tennessee cops have repeatedly pointed guns at me. It would be foolish not to wear a ballistic vest. I was detained once for about 20 minutes and let go. The search included a pat down and the temporary seizure of my rifle case. Once I was released, I proceeded to do an interview with News Channel 5 who was taking pictures from across the street. I then continued to pass out leaflets and was walking back to my vehicle when I was stopped by a crazy cop. He detained me, while his henchmen removed my sealed/locked rifle case and pried it open without permission. They saw a suppressor attached to an AR15 rifle inside the case. The rifle was unloaded and had no magazine. I was arrested for the silencer even though confidential ATF form 3 paperwork was inside the case. I am an FFL NFA dealer and pay the SOT. Information from the form 3 ATF document may only be disclosed to federal officials for violation of the NFA. The cops said that since the case appeared to maybe have a rifle in it they were justified in opening it.

I was arrested for illegal possession of a silencer. I was strip searched as ordered by a sergeant to look for “keys.” I was the only one that I saw stripped searched in that manner. I was held without bond for several hours. I was finally given a chance to see the magistrate at about 9pm on video. He gave the cops permission to cut the cable lock on the rifle case. Inside the case, they saw that the rifle was unloaded and they discovered the ATF form 3. That did not matter to the magistrate judge and I was charged and to be held on a $3000 bond. I thought I would have a real judge see the evidence the next morning so my intention was to hang out for the night, but they said court would not be held until August 2nd. I was not going to wait three days in jail, so I bonded out at about 5AM on 7-30-13.

I have broken no law and believe the DA has not dropped the charges for fear of a federal lawsuit. I have filed papers with the criminal court for a preliminary hearing, speedy trial, pro se defense, discovery, motion to change the court time to August 20th at 9AM, motion to return my property, and demand jury trial.

The case was made from kydex. The kydex covered every part of the firearm and no part of the firearm was visible. The kydex was molded to be form fitting and was very tight. The case needed nothing to remain closed, but I made sure the case would not open by using additional means. A cable lock was placed on the kydex case so that the firearm could not be used. The cable lock was placed around the trigger housing. The sling was strapped in two places over the kydex case, preventing the case from being opened. As a final touch, I placed tape around the case at six points to ensure cops did not attempt to open it. As added security, there were no keys for the cable lock.

“The information from this application may only be disclosed to Federal authorities for purpose of prosecution for violation of the National Firearms Act.”