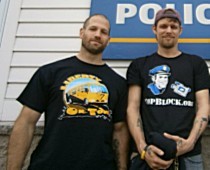 Here’s a write up about my pending lawsuit with the Greenfield (MA) Police Department. Some of these facts are not correct – as usual (best example is in the title, says the charges were dismissed but later states – correctly – that Pete and I were found not guilty at trial) – but I don’t really want to spend any more time on this issue. All the information about Pete Eyre’s and my case is documented in detail at http://copblock.org/greenfield

By Jonathan Adams at www.OpenMediaBoston.org

It alleges that the Town is responsible for having not provided training to officers about the public’s constitutional rights to film law enforcement, and that as a result of the failure, “it was highly likely that the Greenfield police officers would unconstitutionally arrest people for openly recording police conduct or conduct of other governmental officials.”

The complaint says that Mueller, together with his friend, Peter Eyre went to the Franklin County House of Corrections on July 1, 2010 to enquire about bail for a friend of theirs.

The pair spoke with correctional officers at the jail, while openly filming their interaction with a camera, who ordered them to stop recording inside the lobby or to leave the premises.

Outside the front entrance to the facility, they were again asked to stop filming, but the pair refused to do so.
Greenfield Police Department was contacted to remove Mueller and Eyre from the premises, and they were arrested by Defendant Officer Todd Dodge for, “wiretapping, trespass, and resisting arrest.”

According to the complaint, “When Plaintiff-Mueller and Mr. Eyre questioned why they would not be permitted outside the House of Corrections to film ‘the people who work for them’ (meaning the correctional officers and Defendant Dodge), Defendants Dodge and Other Greenfield Police Officers placed Plaintiff-Mueller and Mr. Eyre under arrest for trespassing.” (Explanation in original)

The men were kept overnight in a cold cell without their pants or blankets, were denied from making a call to reach legal counsel, did not have an opportunity to be released on bail, and that Mueller’s mobile home was illegally searched and then towed.

They were arraigned the following day and released without bail, though the Greenfield Police Department kept their cell phones and camera as evidence.

Mueller was tried before a jury at Greenfield District Court and found not guilty of all charges on July 18 and 19, 2011.

Mueller suffered from symptoms of “emotional distress” after being charged, even though “he knew he had not violated the law, but he worried that a felony conviction would result in a substantial jail term.”

Defendants allegedly “arrested Plaintiff to intimidate him and to serve as a lesson to Plaintiff and others that attempting to openly record police officers in Greenfield could result in arrest,” and that they, “caused criminal charges to be brought against Plaintiff without probable cause and with malice.”

Around May 2011, Mueller also was issued a citation by unidentified police officers, while handing out leaflets to the public.

The leaflets he distributed, “described to members of the public of his impending trial and the actions of the community’s police department,” and it is alleged that, “The issuance of the citation for jay walking was in retaliation for Plaintiff-Mueller’s exercise of free speech …”

The complaint alleges a number of violations including against freedom of speech, the state’s Civil Rights Act, freedom from malicious prosecution, due process, and freedom from retaliation.

Video of the interaction with officers at the Franklin facility was placed online at some point after his arrest.
Mueller, with an address in New Hampshire, was convicted in an unrelated Manchester case on August 13, 2012 for illegally recording phone conversations with a police officer and school staffs without their consent, and posting video of those conversations online.

He was given a suspended sentence on two charges, and on a third charge the sentence was suspended except for 90 days.

The phone calls and film were made by Mueller following the alleged use of excessive force caught on camera during the arrest of a high school student at a Manchester school in 2011.

New Hampshire Supreme Court agreed to hear an appeal on his conviction on October 26, 2012.

Mueller is seeking compensatory and punitive damages, and the payment of legal fees and costs in his suit against Greenfield.

The defendants had yet to file an answer to the complaint by the filing of this report.

The case will be heard by US District Court Judge Nathaniel Gorton.

83
SHARES
FacebookTwitterGoogleRedditTumblr
DiggLinkedinStumbleuponMailPrint
EPN
You Can Support Cop Block by shoppping on Amazon using the banner below:
BANNERS ARE CLICKABLE