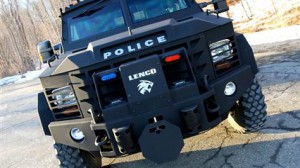 This article was shared with us by Chris Cantwell.

Recently a great deal of fuss has been made about the police department in Concord, New Hampshire applying for a grant from the US Department of Homeland Security to obtain a tank. The military apparatus in question is a Lenco Bearcat, an armored vehicle with gun ports. The police, of course, claim it is only a rescue vehicle, as evidenced by their use of several such vehicles to rescue Dzhokhar Tsarnaev, a wounded, unarmed, 19 year old, boy.

Much of the controversy centers around the application for the grant, in which police say they have a domestic terrorist problem, including, but not limited to “Free Staters”. Now, I can certainly see why people would get upset about that. After all, in the 12 year history of the Free State Project, I’m aware of exactly zero incidents of Free Stater initiated violence, and the FSP website says rather clearly “Anyone who promotes violence, racial hatred, or bigotry is not welcome.”. I can personally attest to the aversion Free Staters have to any sort of violence, because I was practically run out of town for simply suggesting that people have the right to defend themselves against government agents, and the inevitable outrage that this article will invoke from libertarians may serve as further proof.

On the other hand, we have no shortage of violence involving Free Staters. Government agents have repeatedly harassed, assaulted, and kidnapped Free Staters. The next logical step is for police to begin killing these peaceful activists, and the acquisition of military hardware in the name of this group is a rather obvious sign that this is their intention.

Mislead pacifists have told me for some time, that we have to meet government violence with non-violent resistance, and civil disobedience, because government agents don’t know how to deal with non-violent people. Clearly, there is an ever increasing amount of evidence that these people are completely misinformed. Government agents know exactly how to deal with peaceful people, they deal with them using violence, and the acquisition of the Bearcat in Concord is just one in a long line of examples.

Need I continue? Because there’s really no limit to how long I could make this article if I chose to list every example of government violence against peaceful people, this is just a short list of people I know personally, who were attacked in just the last year or so. Imagine if I decided to start digging through old newspapers…

The government doesn’t much care if you are peaceful or not, all they care about is if you are obedient. Free Staters are not being labeled as terrorists because they are violent; they are being labeled as terrorists because they are disobedient. Being violent is not a prerequisite for government violence being used against a person, and in the entire history of statism, it never has been. The only prerequisite of government violence is disobedience, and in entirely too many cases, even obedient slaves are harassed, assaulted, kidnapped, or murdered by government agents.

Deep down, Free Staters know this, and that’s why they’re Free Staters. They see this injustice, they want it to stop, and so they are coming together to make a stand against it. The only problem is, now that they have come together, they have absolutely no idea what to do, because their vision of a peaceful evolution to a voluntary society is being shattered on an almost daily basis by government violence. That violence is all too sure to escalate, as the government agents of New Hampshire and elsewhere acquire more advanced and sophisticated technology to oppress these peaceful activists, and the population in general.

Carla Gericke, president of the Free State Project, correctly points out in her letter to the Concord police chief that “most libertarians strongly believe in the non-aggression principle, and choose to disassociate from those promoting the initiation of force”.

Nobody in their right mind wants to see something like that happen, so we tend to do as we are told, fill out our paperwork, pay our taxes, and go on about our daily lives with as little conflict and discomfort as humanly possible. When our friends are kidnapped, instead of breaking them out of prison, we visit them there. When police set up a road block, instead of barreling through it, we complain verbally. This of course, does nothing to prevent the government from building its arsenal and making more and more belligerent threats against us, because government agents are not in their right minds.

Some will accuse me of helping the Concord PD obtain their Bearcat by writing this article, but Free Staters need look no further than Keene (prior to my arrival) to see where this is going. No crime to speak of in the area, the activist faction that calls Keene home are perhaps amongst the most radical pacifists on the planet, and the public was largely against the acquisition of the KPD’s Bearcat. But, there it sits in their parking lot, collecting dust, just waiting for someone crazy (brave?) enough to take the “Live Free or Die” motto, or Article 10 of the NH Constitution seriously…

The best advice I can offer to people who are concerned about this type of militarization of police forces, is to build their own militarized forces. While not stylish, it’s not terribly complicated to up armor your own vehicle, and nothing you say is going to convince predators not to prey on you. They will stop when it is no longer in their interests to do so, and as long as you take it lying down, as long as the most resistance you are capable of putting up is holding a sign, filing paperwork in their court, or self-righteously waving your finger at people, aggression will be a rewarding career choice for anyone who is so inclined.

Chris Cantwell is an comedian, activist, and public speaker, originally from New York.

This was originally published at http://becauseihatethegovernment.blogspot.com/2013/08/concord-police-go-and-get-your-bearcat.html