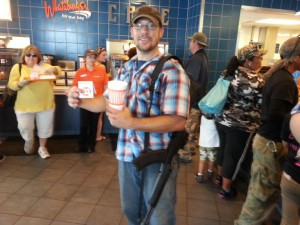 I’m reaching out to you all in regards to the recent unlawful arrest and detention of a founding member of Come And Take It America’s Denton Chapter.

Prior to his unlawful arrest, he was making his way through the southern portion of Texas, stopping at police department after police department, taking pictures in front of their department, showing their support for the 2nd Amendment and an individual’s right to bear arms.

One of his encounters was publicized by KGBT Action 4 in Brownsville, TX (source: https://www.facebook.com/photo.php?fbid=10151475390686157 ). As well as the event in Corpus Cristi the weekend prior, which was covered by KRISTV ( source: http:// www.kristv.com/news/men-carrying-loaded-rifles-march-down-shoreline/ ).

We’re trying to spread the word about his recent apprehension. Will you help by posting the encounter?

Currently, we’re passing the following information on to our members:

THIS IS PRIORITY CALL TO ACTION. READ AND SHARE THIS EVERYWHERE YOU CAN!

One of our founding members, Murdoch, has just been arrested and booked for “criminal trespass” and “weapon in a prohibited area” in McCallen, Texas. He was on public property. He went to the police station to inform them that he was going to take a picture with his rifle in front of the police department as we have done in several other cities around the state. They immediately and illegally searched him and confiscated his legally possessed K-bar (only 5 1/4 inches long) and told him to leave, which he did. He then decided to return to file a formal complaint and called the police department to let them know he was coming back to do so. When he arrived at the police station, officers immediately drew on him, forced him to the ground, and arrested him. HE NEVER OPENLY CARRIED HIS FIREARM; IT WAS IN HIS TRUCK THE ENTIRE TIME. He will be at the McCallen jail overnight and then is getting transferred to County in the morning.

OCT board members did a conference call with the Lieutenant to explain that they are violating the law and illegally detained our member. He said that Murdoch couldn’t “alarm” people and that the courthouse and jail were attached to the back side of the police station. This is not a crime as long as there isn’t a capital offense being tried, which there wasn’t. When we explained the law to the Lieutenant and explained that we would bring down as many members as we could to open carry on their doorstep if they didn’t release him, he hung up on us.

We need as many people as we can muster to rally at the McCallen Police Department at noon on Saturday to put the police department there on notice that our rights will not be infringed. I know this is way out of the way, but if we don’t stand up where we can, we have no business being here.

THIS IS WHERE THE RUBBER MEETS THE ROAD. THIS IS WHAT WE DO. WE CANNOT AFFORD TO SIT IDLY BY.

USMC Vinyl Marines & Osprey Banner 34"x77" FOR OUR NATION. FOR US ALL Marines