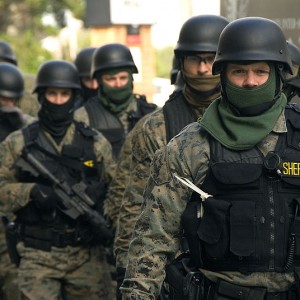 Michael Snyder published this article at EndOfTheAmericanDream.com on August 8, 2013.

Once upon a time, the police were one of the most respected institutions in America, but now most Americans fear them. Almost every single day there are multiple stories of police brutality or misconduct that make the national news. Just this week, there have been stories about police killing a baby deer at an animal shelter, about police killing a 95-year-old World War II veteran in a retirement home, and about police using legal technicalities to “legally” steal massive amounts of money from innocent citizens.

Why are police acting like this? Why have police in America turned into such ruthless thugs? In the case of the baby deer that was killed, 13 armed agents stormed the animal shelter up in Wisconsin where it was being cared for. Is this really the kind of country that we want our children to grow up in?

A country where Bambi is hunted down by armed thugs working for the government? Sadly, the story about that deer is not an isolated incident. The truth is that police all over the country kill animals every single day. In fact, police in Chicago have shot 488 animalssince 2008. No wonder people are so afraid to have the police come to their homes.

Increasingly, police departments all over the United States are being transformed into military-style units. These days, even very minor violations of the law can result in a SWAT team raid. The following is from a recent article by John Whitehead of the Rutherford Institute…

But it is not just local police departments that are being militarized. This is happening on the federal level as well. In fact, according to Whitehead even the Department of Education and NASA now have their own SWAT teams…

When it comes to SWAT-style tactics being used in routine policing, the federal government is one of the largest offenders, with multiple agencies touting their own SWAT teams, including the US Fish and Wildlife Service, Consumer Product Safety Commission, NASA, the Department of Education, the Department of Health and Human Services, the US National Park Service, and the FDA.

What in the world does NASA need a SWAT team for?

The police culture in America has fundamentally changed. In the old days, most police officers were extremely helpful and would give you directions or help you get your cat out of a tree.

But if you stop and ask a police officer for help today, you will be lucky if all you get is some dirty language. These days, police all over the nation are actually being trained to bark orders at you and to respond to the least bit of resistance with overwhelming force.

The results of this kind of training can often be extremely tragic. Just the other day, a 95-year-old World War II veteran living in a retirement home near Chicago was murdered by police just because he did not want to undergo high-risk surgery…

A 95-year-old man who served his country during World War II is now dead after police stormed his retirement home with riot shields, Tasered him and shot him with bean bag rounds – all because he adamantly refused to undergo high-risk surgery.

U.S. Army Air Corps veteran John Wrana, who was honorably discharged as a sergeant after he served in the India-Burma campaign, used a walker because family members said he was “wobbly” on his feet, according to the Chicago Tribune. The elderly veteran was shot down by enemy fire during the war.

On July 26, a doctor reportedly told Wrana if he survived surgery, he would likely be put on life support. The elderly man refused the operation, and paramedics attempted to involuntarily transport him for medical treatment. He was sitting in a chair, holding a cane and a shoe horn when police arrived at the Victory Centre senior living facility located just south of Chicago.

Why did the police have to act like that?

Is there any police officer out there that cannot physically handle a 95-year-old man?

That 95-year-old veteran survived fighting the Japanese, but he was not able to survive the thuggish behavior of our own police.

And most Americans don’t realize this, but when police pull you over they can take cash and property from you even if you have not done anything wrong. It is called “civil forfeiture” and it is one of the worst things about U.S. law. Civil forfeiture was described in a recent article by Becket Adams…

Did you know that the police can confiscate items such as cash and property from people who have never been convicted of a crime?

It’s true, and it’s all because of a little-known police tactic called civil forfeiture.

A product of the so-called “war on drugs,” civil forfeiture was part of the Comprehensive Crime Control Act of 1984 passed by Congress 29 years ago. The bill gives law enforcement officials a portion of the assets seized during drug raids and similar investigations.

-Police took the home of an elderly couple in Philadelphia because their son allegedly sold $20 worth of marijuana on their front porch.

-Police in Virginia pulled over a speeder and took $28,500 that was intended to be used to purchase a new parcel of land for a Pentecostal church.

The county’s district attorney, a fifty-seven-year-old woman with feathered Charlie’s Angels hair named Lynda K. Russell, arrived an hour later. Russell, who moonlighted locally as a country singer, told Henderson and Boatright that they had two options. They could face felony charges for “money laundering” and “child endangerment,” in which case they would go to jail and their children would be handed over to foster care. Or they could sign over their cash to the city of Tenaha, and get back on the road. “No criminal charges shall be filed,” a waiver she drafted read, “and our children shall not be turned over to CPS,” or Child Protective Services.

“Where are we?” Boatright remembers thinking. “Is this some kind of foreign country, where they’re selling people’s kids off?” Holding her sixteen-month-old on her hip, she broke down in tears.

If you have not read the new article in the New Yorker that goes into great detail about all of this, you can find it right here.

So why are police all over America acting like this?

Well, one of the primary factors is that they are just following the example that is being set on the federal level.

The entire country is rapidly being transformed into a “Big Brother” police state, and most Americans seem to like it that way.

And with each passing year, it just gets even worse. For example, we were originally told that the TSA would only be hassling us at our airports, but now they are everywhere. As the New York Times recently reported, TSA “VIPR teams” are now being deployed almost everywhere there are large gatherings of people…

The program now has a $100 million annual budget and is growing rapidly, increasing to several hundred people and 37 teams last year, up from 10 teams in 2008. T.S.A. records show that the teams ran more than 8,800 unannounced checkpoints and search operations with local law enforcement outside of airports last year, including those at the Indianapolis 500 and the Democratic and Republican national political conventions.

So where is the outrage?

A small minority of the American people have been sounding the alarmabout NSA snooping and other abuses, but most Americans don’t really seem to care about these things very much.

In fact, according to a new survey conducted by the Pew Research Center,47 percent of all Americans don’t even want the media to report on secret government surveillance programs.

So not only do they not want the surveillance to stop, 47 percent of all Americans do not even want to hear anything about it on the news.

How sickening is that?

Sadly, this is not the first survey that has produced this kind of a result. For much more on this, please see my previous article entitled “19 Surveys Which Prove That A Large Chunk Of The Population Is Made Up Of Totally Clueless Sheeple“.

In the end, we will get the government that we deserve. And according to the New York Times, at this point our government is even willing to manufacture fake terror threats in order to distract us from their surveillance activities…

Some analysts and Congressional officials suggested Friday that emphasizing a terrorist threat now was a good way to divert attention from the uproar over the N.S.A.’s data-collection programs, and that if it showed the intercepts had uncovered a possible plot, even better.

What in the world is happening to America?

Is there any hope for us?