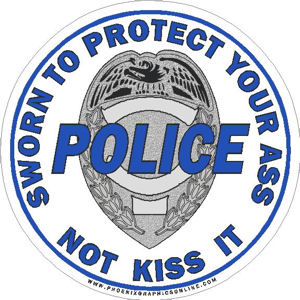 The OC Register is reporting the story of Kevin Anastasi, a Huntington Beach resident who noticed two stray dogs in his neighborhood in April 2009, he then called his cities finest, who have sworn to protect his ass, not kiss it.

According to the complaint, Anastasi was holding a metal pole to protect himself from the stray animals when police arrived. The police immediately drew their weapons shouting  “drop the weapon, (expletive)”.  Anastasi claims he immediately put down the pole, but  the cops still forced him to the ground and choked him until he lost consciousness. He was arrested and charged with resisting a peace officer.

The case was dismissed last August when he pleaded not guilty to the charges, but Kevin isn’t stopping there. He is suing the city, wanting at least $25,000.

﻿Anastasi says in the lawsuit his neighbors were telling police they were “making a mistake but police ignored them… and treated them in a rude and disrespectful manner”.

Kevin claims he was injured in the altercation and wants repayment for his medical and lawyer expenses. The problem is, the officers involved in this case won’t pay a cent if he wins. The taxpayers of Huntington Beach will be the losers. This also makes another strong case why you should always carry a camera while filming police. There is no video tape of this incident, which would greatly help Kevin’s cause.

Another  lesson learned from this is that police aren’t necessarily concerned with your safety, This article doesn’t have any quotes from the officers, or report the officers names, but they appeared for their own safety first. Now if they serve and protect, they should be concerned for Kevin’s safety first and not their own. At least that is what officers will tell you, they selflessly put their lives on the line to protect yours, but also will say their safety is important when something like this happens. It’s a little thing called cognitive dissonance.

If these men were really out to protect the people of the city of Huntington Beach, they would have seen a man fearful of two stray dogs who called them for help, assured Kevin they would take care of the situation, possibly call Animal Control or whatever their local code states, gotten inbetween Kevin and the 2 dogs and “protected his ass”

But that’s not how police operate is it?

Instead they immediately demand Kevin put down his pole, that he was holding to protect himself, then choke him until he blacks out and try and nail him for resisting.

I guess that falls under not kissing your ass.

City Attorney Jennifer McGrath declined to comment on the suit and Anastasi’s lawyer, Robin Fairbairn did not immediately respond to requests for comment.