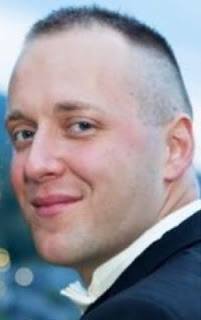 The photos below, although graphic, and disturbing, are important, in that they show what Rochester, NY Police officer Chris Burgstrom (pictured on right) is doing to our innocent family pets.

Rochester, NY U.S. Postal Service mail carriers can go their entire careers delivering mail to tens of thousands of homes, encountering thousands of dogs, and yet never have to use their work-issued pepper spray on one of them.

Steven spent the next couple of days, covering at least 100 miles looking for his best friend Codi.

On Tuesday January 8, 2013, as Steven was searching for Codi, Rochester, NY Police officer Chris Burgstrom responded to a call for a lose dog in the area of Beach Ave., near Charlotte Lake Ontario State Park.

After spotting Codi, Burgstrom hit him with his police cruiser, then chased down the lost, hurt, and scared dog onto a pier, grabbed his department-issued Remington 870 shotgun from his cruiser, walked onto the pier, and shot Codi in the back of the head execution style, after Burgstrom said Codi charged at him.

James told Rochester’s Democrat and Chronicle newspaper reporter Gary McClendon, who was first to report the story, that work crews, who were repaving Flora Street, ordered him to move his truck, which was in their way.

According to James, he tried explaining to the workers that his truck had run out of gas, and therefore he couldn’t move it.

After being told by the workers that they had already called for a tow truck to tow James’ truck away, James called Rochester Police.

James says the next thing he heard were gunshots.

The 53-year old James, who has limited use of his hands, and poor vision as a result of Diabetes, rushed to his bleeding companion, and was grabbed by Rochester Police officers, who handcuffed him, and placed him in the back of an RPD cruiser.

Rochester Police charged James with reckless endangerment for “letting his dog outside after repeated orders by Officer Burgstrom to not do so, causing the risk of serious physical injury.”

Neighbors, who said that Cinnamon was still alive after being shot, believe that she was strangled by a Rochester Animal Services employee, who placed a control pole around her neck.

Rochester Police denied this, saying that Cinnamon was having seizures, and was put down at Animal Services.

James said that Cinnamon, who was given to him by his daughter-in-law as a companion, was a very nice dog.

James’ daughter-in-law, Maraliz James, of Minnesota said, “We had her for two years, she was an indoor dog. She would never even bark at people. I don’t understand why they had to shoot her. She was a very loving dog.”

In court, James was given an “ACD”, which stands for Adjournment in Contemplation of Dismissal, which means that the charge of reckless endangerment will be dismissed if James avoids any new charges.

James says he wants officer Burgstrom to answer for killing his dog.

“She didn’t charge at him, in all of the commotion that morning, I didn’t have a chance to let Cinnamon go to the bathroom, I was preoccupied. She just wanted to use the bathroom,” said James.

On July 13, 2013, just two days after officer Burgstrom shot and killed his companion, Rochester Police arrested James for what they claimed were threatening calls from an untraceable phone, they believed to be James, said RPD Spokesperson Elena Correia.

Correia is the same woman who, during a phone conversation with me, in January, when Burgstrom shot and killed Codi, justified Burgstrom’s actions.

Rochester Police now acknowledge that those calls to 911 had no connection to James.

According to RPD Sgt. Correia, 911 operators received a phone call from a suicidal male who said that he was 34 years old and wanted a police officer was to shoot him by him “running toward a cop,” and “reaching at them” at Rochester’s annual Corn Hill Arts Festival.

Several Rochester, NY Police officers went to the Corn Hill Festival, but could not find the caller.

“The officers, knowing that Floyd James was extremely upset over the recent situation, detained Floyd James because RPD believed he fit the description of the caller,” Correia said.

I don’t know what I find more disgusting.

That your trigger-happy cop, the same trigger-happy cop who struck, then chased down a scared, lost dog onto a frozen, snow covered pier, and shot him in the back of his head, just 6 months later shot and killed another innocent, loving family pet?

Rochester Police then illegally entered James’ home without a warrant.

James says he told officers that he did not call 911 that morning, but RPD officers handcuffed him and placed him in the back of a cruiser, then drove away.

“He never showed up in the hospital or the police station,” said James’ wife, Donna Hodgins-James, who said she and a neighbor went looking for her husband.

“How are they going to help him with mental hygiene without taking him to the hospital?”

The answer is, because the RPD officers didn’t take James to the hospital.

Instead, RPD officers drove James to an isolated area on the banks of Rochester’s Genesee River.

Rochester Police officers then questioned James, who said he was handcuffed, but not injured.

After a while, James said RPD officers “uncuffed me, took me out of one car, and put me in the other car, and that other car took me home.”

So what did Rochester, NY Police Sgt. Elena Correia have to say about her officers illegally entering James’ home, and kidnapping him, then driving him to a secluded area along a river?

Correia said that given the shooting of Cinnamon just two days earlier, and neighbors being on the street, “It was starting to get to be a hostile environment, so the officers decided to just go around the corner on Flint Street, just to make sure that they would be able to handle the situation safely.”

Correia added “While he (James) was detained, 911 received another call from the alleged suicidal male at which point they released Mr. James. The officers acted in good faith by reaching out and providing assistance.”

James is not buying it.

“The non-professionalism of the officers is my concern,” said James.

“They entered his house without a warrant,” she said. “I don’t think they have the right to go into your home and forcibly remove you when you say you didn’t call for help. The man said he didn’t make the calls. That should have been enough.”

Meanwhile, Rochester Police officer Chris Burgstrom continues to be a threat to innocent family pets in my hometown.

Instead of receiving assistance, his companion is executed right in front of him, by a trigger happy cop.

Then James is arrested.

Like I always say, think twice before calling police.

Click link below to read my original piece on Codi