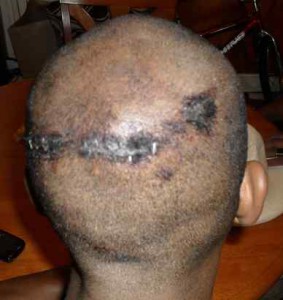 I am surprised that Cop Block has never published an article about complained-about Philadelphia police officer James “Jimmy” Leocal. One of Leocal’s violent crimes was CAUGHT ON VIDEO, yet Leocal was cleared by his crooked joke of a police department (which Amnesty International has suggested is tied with Pakistan’s as the world’s most brutal and crooked.) To follow is the video link:

The video depicts the brutal September, 2010 beating of community activist Askia Sabur by Philadelphia police officers in retaliation for his publicly criticizing them for (ironically) police brutality. To cover up their unprovoked aggravated assault of him, the sanctimonious cops then falsely arrested Sabur for the very crimes which they perpetrated against him! Sabur had just paid for a food order and was waiting outside of a restaurant for it to be prepared. The cops told him to leave, but when he tried to explain why he was there, the crooked cops used his few-second delay as an excuse to attack and destroy him. Thanks to the viral video of the encounter, Askia Sabur was found not guilty of all charges by a jury of his peers on February 19, 2013. Sabur’s truths were believed over the fairy tales told by the always-perjuring Philadelphia cops. Sabur’s lawsuit against the cops is currently pending in federal court. THE COP THUGS FOUND THE SLIGHTEST NONCRIMINAL EXCUSE TO BRUTALLY ASSAULT ASKIA SABUR AND RUIN HIS LIFE, JUST BECAUSE HE TOLD THE TRUTH ABOUT THEIR RUTHLESS CRIMES. NOTE THAT A BLACK COP, JIMMY LEOCAL, WAS ORDERED TO DO THE BEATING, TO AVOID THE APPEARANCE OF RACISM. THANK GOD FOR YOUTUBE VIDEOS!

Sabur suffered debilitating injuries from the attack, including lacerations, contusions, and compound fractures. Leocal is the recipient of other formal and informal citizen complaints. Unfortunately for those complainants, there were no video recordings of Leocal’s felonies. Despite the viral video which definitively proves Leocal’s wrongdoing, he was vindicated by his superiors – as almost always happens to Philadelphia’s criminal cops. Unfortunately, Leocal is barely the tip of Philadelphia’s police-crime iceberg.

This post was shared by Police Crime Victim via CopBlock.org’s submit page.