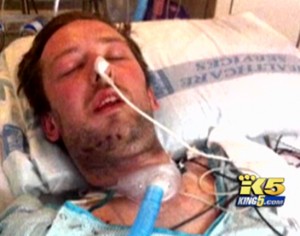 This sickening article was originally published at www.RealFarmacy.com:

Dustin Theoharis was asleep in his bed when a Department of Corrections officer, and King County Sheriff’s deputy rushed into his house, busted into his bedroom and began to unload their pistols on this unarmed man.

It is estimated that the two officers fired over 20 rounds of which 16 landed in Mr. Theoharis. According to Theoharis’s attorney, Erik Heipt, “Theoharis suffered “a broken shoulder, 2 broken arms, broken legs, he had a compression fracture to his spine, damage to his liver and spleen.”

The kicker here is that Theoharis was not the guy the police were after. According to King 5 news Seattle, The King County Sheriff’s deputy and Washington Department of Corrections officer who shot him were at the house to arrest a man who’d violated his parole. But in a search of the house after the shooting, they surprised Theoharis in the basement room he was renting.

Cole Harrison, who was at the house, described it this way: “They (the officers) rushed into that room like they were going to get somebody. I mean they rushed down there and then all of a sudden. Boom, boom, boom, boom.”

According to a review requested by Charles Gaither, a civilian watchdog of the Sheriff’s Office, which was conducted by a police accountability expert, Merrick Bobb, the officers refused to be interviewed on the scene and no internal investigation was ordered. In fact Deputy Aaron Thompson didn’t even issue a statement until a month later.

The report also suggests that the Sheriff’s Office did more to cover for the two officers than it did to investigate the shooting; citing an apparent conflict of interest right from the start. “Under KCSO policy, the first supervisor to arrive at the scene is obliged to assume control of the crime scene, direct involved personnel, and take on preliminary investigation responsibilities. (G.O. 6.02.015, subd. Clearly, given the sensitive issues that often accompany deadly force incidents, the neutrality of the supervisor needs to remain unquestioned. In this case, however, the first responding supervisor, KCSO Sergeant D, did not maintain the position of neutrality. Shortly after arriving on the scene, he switched roles from supervisor and neutral party to officer advocate.”

Also noted in the report is the severe incompetency or deliberate deficiency of the Sheriff’s Office when conducting the investigation. “Nonetheless, we were deeply troubled by serious deficiencies in the underlying investigation and the apparent unwillingness of KCSO to question its own officers about the use of deadly force once it appeared that they have not committed a crime. For example, the involved officers were not immediately interviewed about their actions, but instead were given over a month to provide a written account of the shooting. In addition, physical evidence was overlooked or moved, witness interviews were not thorough, and inconsistencies were not adequately addressed.”

Meanwhile, Dustin Theoharis has undergone 12 surgeries and will never be the same again. This is a travesty of justice and yet another example of how the state can shield themselves from crimes they commit by being above the law. Sadly stories like this one are becoming more frequent as police forces are militarized across the country. “Protecting” and “Serving” are seemingly being replaced with “Oppressing” and “Silencing.”