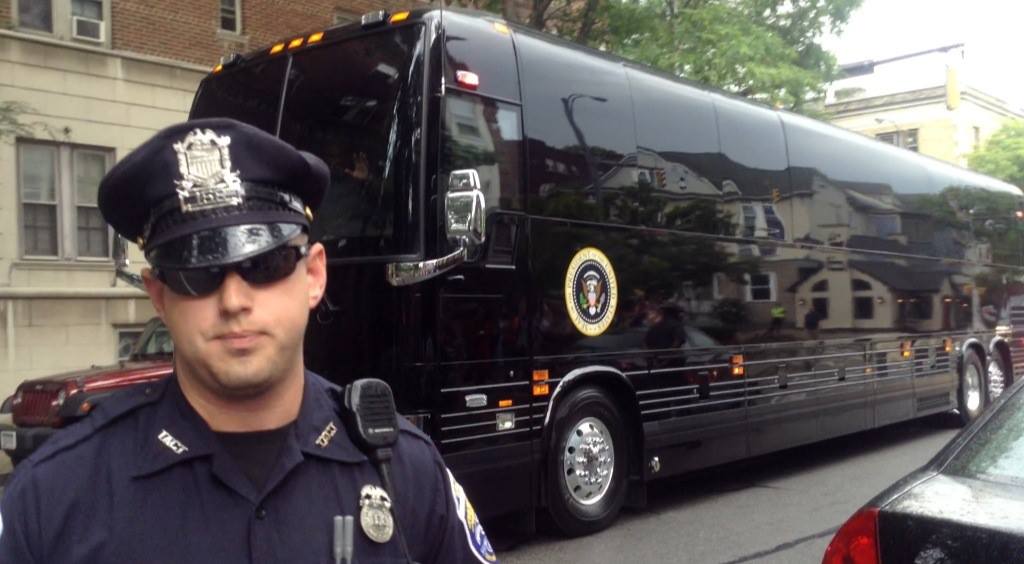 Thursday morning, Air Force One touched down in Buffalo, NY, and within minutes, President Obama was on his way to the University of Buffalo, for what would be the first stop on his two day Education Reform Tour, with an itinerary which in addition to the U of B stop, would also include a stop at a high school in Syracuse. NY.

In between both Upstate, NY cities, folks in Rochester, NY, wondered if the President would make a stop in “The Flower City.”

Amidst rumors that President Obama would stop at Nick Tahou Hots, for a world famous “Garbage Plate”, dozens gathered outside the 95-year old, Rochester landmark restaurant on West Main Street, as the President’s motorcade passed by on interstate 490 East, less than 50 yards away.

Less than 10 minutes later, Ground Force One, the President’s $1 Million, armored tour bus pulled in front of Magnolia’s Deli and Cafe on Park Avenue, where President Obama surprised patrons, and sat down to have lunch.

And, just as Rochester’s mainstream news media outlets did, I raced down to Magnolia’s Deli, as soon as news broke that the President was in fact heading to the Park Ave. eatery.

However, unlike the group of Rochester’s mainstream news media personnel gathered on the corner of Park Ave. and Oxford St., as seen in the videos below, I was selectively targeted, and prohibited from standing on a public sidewalk, next to other media personnel, when Rochester, NY Police officer Jonathan M. Kent, badge number 158, calls me out by my name, (at the 3 minute, 10 second mark of third video above) telling me, “Davy, you have to stand back here.”

As you can see in the videos, when I ask RPD officer Kent why he was prohibiting me from standing where other media personnel were standing, he replies, “because they were here earlier, that’s why they’re allowed to stand there, you’re just getting here sir, so you have to stay back here please.”

How is it even possible to arrive late to what was in essence, an unplanned, spontaneously announced event?

An event, which according to Rochester, NY Police Lieutenant Frank Umbrino (more on my conversation with him in a bit), the RPD, and his officers, had only learned of President Obama’s impromptu visit, just 10 minutes before the President arrived!

I have known Umbrino for over 20 years, since he was a rookie.

I have never had a problem with Lt. Umbrino.

I can honestly say that each and every time I have dealt with Lt. Umbrino, despite the fact that our roles could not be any more opposite, Lt. Umbrino has always been professional, and courteous with me, which is why I was glad to hear his voice on the other end of the phone, when I called to ask for a supervisor regarding the incident with officer Kent.

Not surprising, Lt. Umbrino defended his officer, reiterating something officer Kent said in the videos below.

Lt. Umbrino told me that Secret Service employees had “cleared” the media personnel seen on the video.

I respectfully disagreed with Lt. Umbrino, and reminded him of one of the first things he told me in our conversation.

Lt. Umbrino told me that the President’s visit was so short notice that he and his officers only received a 10 minute heads up.

I mean sure, a perimeter was set up for media personnel, but its not likely, given the short notice of the President’s visit, and given everything the Secret Service had on their plate, that they actually took the time to “clear” individual media reporters and camera persons, on a one by one basis.

Then, in what perhaps was the highlight of my conversation with RPD Lt. Umbrino, I asked him if he himself, treated a “mainstream media professional” any different than say someone like myself, not a member of Corporate-America-run news media, but nonetheless a citizen journalist, and a credentialed press correspondent, whose work has a strong presence, in several print media publications, and Internet sites, and whose first book is publishing soon.

Lt. Umbrino’s response is perhaps one of the most accurate, on point statements I’ve ever heard a law enforcement officer say.

Later in the evening, while channel surfing, I came across something I found ironic.

I saw a young man being interviewed, who got to shake President Obama’s hand.

“We were just standing on the corner waving then a couple of secret service agents came up and were like hey would you like to have a closer spot? and we were like sure!”, said Muhammad Ahsan.

The United States Secret Service, the President’s security, inviting citizens to get closer to the President.

So much for the Secret Service clearing each and every member of the mainstream media, officer Kent, and so much for you being under direct orders from your superiors to keep tight security.

But if the Secret Service inviting folks to get closer to the President is not enough, pay close attention to what is happening directly behind officer Kent, at the same time he is refusing to let me through.

Several individuals, who are not members of the media, including a woman in a blue outfit, are seen walking right through the “restricted”, “no one can walk though here” area which officer Kent is supposed to be “guarding.”

Another interesting thing, which can also be seen in the first video, is officer Kent giving me a wrong badge number “185”, several times, even though his badge number, as you can see on the front of his hat, is “158.”

In the end, I don’t know what I find more disgusting.

RPD officer Jonathan Kent clearly violating his department’s own Code of Ethics by allowing his personal feelings, prejudices, and animosities interfere with his job, and as a result violating my first amendment right, or the individuals who can be heard on the video asking officer Kent to taser me.

There’s something very disturbing, and quite eerie, to be have one’s first amendment rights violated, while people in the crowd yell “Taser him!”, as the President of the United States, and leader of the “free world” is less than 200 feet away.