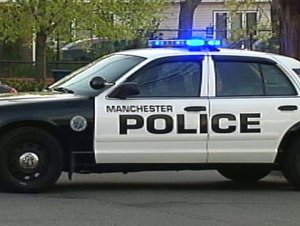 On Monday August 26, 2013 around 10:40 AM, my wife and I stopped at Cumberland Farms on Hanover and Beech Street in Manchester, NH for iced coffees. My wife ran into the store. A young lady, who I would estimate at 20 years old, approached my car and asked me for a cigarette. I asked her if she was 18. She said she was, and I gave her a cigarette. About two minutes after I provided her with the cigarette, the Manchester Police swarmed the parking lot, guns drawn. There were eight uniformed cops and four detectives; they had me get out of the car, put me up against the car with my hands on my head, and when my pregnant wife came out of the store they made her lean against the car the same way. I asked what the problem was and one of the detectives rudely told me, “You just gave a juvenile fucking cigarettes, you are going to jail for a long time.”

They did not even ask to search my car, but they did search us and the car. All they found were cigarettes. I saw the lady talking with the cops and was told she is an undercover officer. I told them to stop searching my car and was told to “shut my fucking mouth.” After being detained for over 20 minutes, the cop gave me a summons to appear on September 5, 2013 in Manchester District Court for providing tobacco to a minor. I know that if she is a police officer, she has to be at least 21 years old. The summons says it is a class B misdemeanor, which i think is a maximum fine of $1,200. I feel like this is entrapment. Manchester police have no real crime to solve. They made me and my wife feel like dirt-bags, and why the hell did they have so many cops – cops with their weapons aimed at us – when we did nothing but give someone a cigarette. The cops wrote my wife the same summons, though she was not even outside when I gave the woman the cigarette – and yes, it was just a regular cigarette.

The officers and the detectives were very rude, but that is nothing new with Manchester Police. When I got home, I called the oinker in charge and was told they were within their rights and doing their job protecting the city from low-life Cop Blockers. (They saw the Cop Block sticker on my car.) The Manchester Police are just bullies with badges.