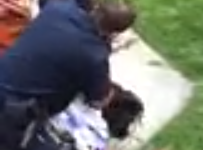 A video which has surfaced on YouTube shows a Rochester, NY Police officer beating a pregnant woman.

The woman is heard yelling “You’re going to kill my baby!”, seconds before the Rochester Police officer is seen driving the woman into a wooden porch railing.

The RPD officer is then seen punching the woman with a closed fist, on the right side of her head.

After calling Rochester, NY Police Sgt. Elena Correia, the department’s Public Information Officer (PIO), and being transferred to 5 different individuals, only to be told that Sgt. Correia is on vacation, and asked to leave a message, I was told that RPD Sgt. Hammond is filling in for Correia as PIO.

The officer I spoke with told me he had not heard of the incident, and asked me how he can look it up.

I’m waiting to hear back from Rochester Police Sgt. Hammond.

According to Patrick, in Rochester’s ABC affiliate, 13WHAM news channel’s newsroom, a video which is going viral showing a Rochester, NY Police officer punching a pregnant woman in the head, then throwing her on the ground, may not be real.

“Before we do anything, we’re making sure it’s a legit video”, Patrick told me, after I called the station, and didn’t identify myself.

Well, I wanted people to see what I have been saying for years, when it comes to Corporate-America run, mainstream news media, and their “Don’t bite the hand that feeds you” relationship they have with law enforcement.

Therefore, they are very careful when reporting anything which shows law enforcement in a negative light.

And I’d say that a video of a white Rochester, NY Police officer beating a pregnant African-American woman, punching her in her head with a closed fist, then throwing her on the ground, is not good for that relationship which Rochester’s Corporate-America run news media has with the Rochester Police department.

Check out the conversation I had with Patrick in the video above.

Notice how uninterested he actually seems in the story, despite his acting like he is.

If you ask me, I don’t even think they contacted the RPD.

When will Rochester, NY’s Corporate-America run, mainstream news media report on what is a clear case of excessive force?

Finally, more than 12 hours after I broke this story on my blogs, and on Copblock.org, Rochester’s Corporate-America run, mainstream news media decided to report on it, and Rochester, NY Police Chief James Sheppard has set a 2:00 pm news conference to “address” the incident.

Although I am not in Rochester, I will be updating this post soon.