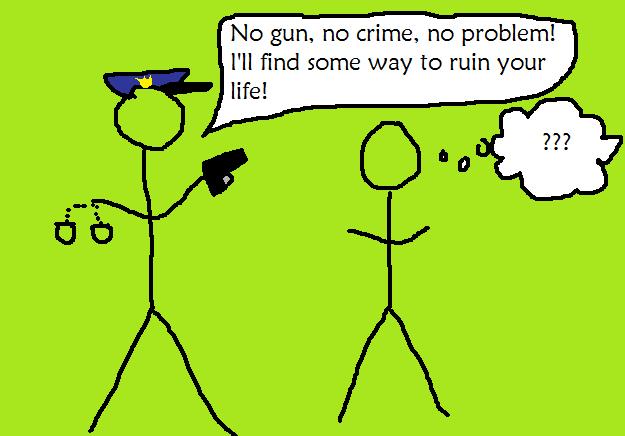 Reginald “Neli” Latson, a 19 year-old, sat in the grass outside the library and waited for it to open. Police allege that shortly after, some children purportedly were frightened and claimed there was a suspicious black male who had had a gun. A nearby school was put on lockdown, and a search ensued. Deputy Calverley then approached Latson, squeezed the front pocket of his sweatshirt and checked for a gun. No gun was found. The children questioned later also confirmed they never saw a gun. Calverly asked Latson for his name, and Latson refused. Calverly then grabbed Latson and attempted to arrest him. Latson struggled with Calverly, managed to flip him over, and caused Calverly’s head to hit the pavement. Latson hit Calverly several times and took his pepper spray.

After a 3-day trial, Latson was found guilty of assaulting a law enforcement officer, among other charges and 10 1/2 years in prison was recommended (read the full story here). Latson’s defense centered around the fact that he has Asperger’s syndrome, a condition caused by an abnormality of the brain. People with Asperger’s syndrome often have difficulty interacting socially, and may be unable to respond emotionally in normal social interactions.

Latson’s case has drawn sympathy from autism and Asperger’s syndrome advocates, and raised concerns about how law enforcement deals with the developmentally or mentally disabled. Surely, this case is a sad one. It appears to be another classic case of a young, innocent black man getting screwed because he wore a hoodie and was in the wrong place at the wrong time – and on top of that, he had a condition that may have contributed to these circumstances.

However, what is ultimately most disturbing is the fact that this has become an issue of autism/Asperger’s syndrome. Instead of defending Latson’s justifiable reactions to an unjustified detention and attack, his supporters seek to excuse it by characterizing it as the product of a mental disability. Latson had done nothing wrong and was completely within his rights to sit on the grass until the library opened, but was accosted by an officer who then proceeded to question, detain and arrest him, even after confirming he did not have a gun (and even if he did have a gun – so what? It’s called the Second Amendment).

Latson was under no moral duty to be groped by this officer. He was under no moral duty to provide his name. He certainly should not have been arrested, either from a legal or moral standpoint. This was a young man who simply wanted to be left alone, and the officer would not yield to this simple desire of a denizen of the alleged land of the free. Police apologists like to say, “if only he had complied, he wouldn’t have been (insert torture, beating or murder of choice here)!” But the most appropriate way to view these interactions (if in fact we are free people) is the other way around – if the police had just minded their own damn business no one would have been hurt. Yet in this case, Latson’s supporters do not decry his treatment on the basis of police abuse and the fundamental right to simply be left alone, they decry it on the grounds that police need to better learn how to deal with people who may suffer from certain conditions and/or disabilities.

This is what it has come to in this country. If you defend yourself against abusive authority, it must be because you are mentally disabled.

Significantly, people with Asperger’s syndrome sometimes are unable to pick up on social cues, and are unable to understand more abstract expressions such as sarcasm or humor. As a result, they may tend to take words more literally than most people. Thus, it isn’t a stretch to surmise that some people with autism or Asperger’s would not understand that even in the absence of provocation, a police officer has the legal authority to violate their privacy and freedom with detention and arrest. People with autism or Asperger’s syndrome see it for what it truly is –  an aggressive stranger with a gun, coming out of nowhere to interrogate, demand, and kidnap. Perhaps people with autism and Asperger’s are the only people left in this country who rightly fail to see how a uniform and a title justifies initiation of aggression and kidnapping.

Yet general consensus among those sympathetic to Latson is not that police aggression has long exceeded acceptable bounds, but that Officer Calverly was also a victim in this, and that police need to be better trained for such situations in the future. Perhaps Latson did injure Officer Calverly more than he deserved. However, if one is going to arbitrarily initiate violence on innocent people, he should be prepared to suffer the reasonable consequences that may follow when the target of his violence tries to defend himself.

Latson’s only “mistake” was that he failed to understand the abstract idea that a fancy government title and a uniform legally creates a different standard for police. Police often do what Calverly did, on a regular basis, but most people are cognitive of social norms and perceive that a gun and a badge grant legal rights which demand submission, and do not defend themselves against unwarranted police violence either out of misguided deference, or justifiable fear.

Even in the face of this event, people continue to argue police merely need to be better trained. This perspective, while not limited to such supporters, is delusional. Police love violence. They use it daily in the course of their employment. If they didn’t love violence, they wouldn’t have signed up for the job. To think some training would make them more sympathetic or sensitive to their victim’s particular conditions is just stupid.

*After corresponding with Neli’s mother, Lisa Alexander, we have learned that Neli was in solitary confinement for 8 months for no apparent reason. They finally moved him to the general population in January after many requests by his mother.