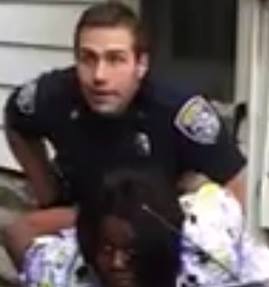 The Rochester, NY Police officer who was caught on video driving a pregnant woman into a wooden porch bannister railing, punching her in her head, then throwing her on the ground, has been identified as RPD officer Lucas Krull.

And apparently, despite the fact that he beat a pregnant woman, and that it was captured on video, his boss, RPD Chief James Sheppard defended Krull at a 2 pm news conference held the Public Safety Building.

“The fact that she may have been pregnant or not, I do not know”, said Sheppard.

At a news conference held in the Public Safety Building, Sheppard defended Rochester Police officer punching 21-year old Brenda Hardaway on the side of her head with a closed fist.

Sheppard said the strike was part of a technique used by RPD officers.

Shepard said that his officers were called to Selye Terrace on Rochester’s northwest side for a domestic dispute, and a short time later, placed Hardaway’s 16-year old brother, Romengeno Hardaway, under arrest.

RPD Chief James Sheppard, who was in full spin-mode at the press conference looked like a man in denial.

A man who knows that his officers are out of control.

A man who knows that the very same community that he so desperately wants respect from, looks at him for what he is.

A complete hypocrite and sellout.

Look, here’s the thing, was the woman resisting?

That doesn’t justify, Rochester Police officer Lucas Krull punching her in her head, then throwing her to ground, even though she told officer Krull that she was pregnant.

Perhaps the young man who recorded the video, Henry Loggins, said it best.

“I don’t respect any man who puts his hands on a woman, and she’s a pregnant woman.”