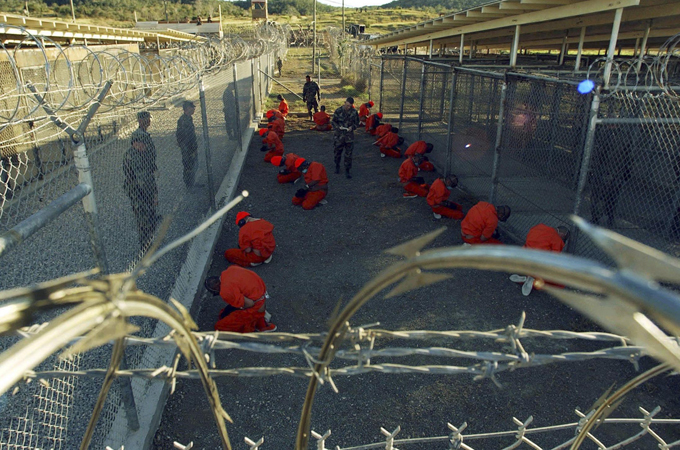 Last week, WikiLeaks and several prominent news sources began publishing hundreds of classified documents about the US government’s secretive prison in Guantanamo Bay where hundreds of people have been held for years without trials and ruthlessly tortured as part of the government’s so-called “War on Terror.” The release of the files comes just weeks after President Obama, in spite of his promises to close the prison, signed an executive order formally announcing his intention to hold many of the remaining detainees indefinitely without trials.

The documents were first obtained by WikiLeaks, the whistle-blowing organization which in the past has been responsible for such notable leaks as the “Collateral Murder” Apache helicopter video, the Afghan and Iraq “war logs,” and the U.S. State Department diplomatic cables. WikiLeaks provided the files to several of its partners including The Telegraph and The Washington Post. The files were also provided by a different source (WikiLeaks believes it was Daniel Domscheit-Berg, a former associate) to The New York Times which shared them with The Guardian and NPR.

WikiLeaks describes the significance of the documents in some detail on their website:

These memoranda, which contain JTF-GTMO’s recommendations about whether the prisoners in question should continue to be held, or should be released (transferred to their home governments, or to other governments) contain a wealth of important and previously undisclosed information, including health assessments, for example, and, in the cases of the majority of the 171 prisoners who are still held, photos (mostly for the first time ever).

They also include information on the first 201 prisoners released from the prison, between 2002 and 2004, which, unlike information on the rest of the prisoners (summaries of evidence and tribunal transcripts, released as the result of a lawsuit filed by media groups in 2006), has never been made public before. Most of these documents reveal accounts of incompetence familiar to those who have studied Guantánamo closely, with innocent men detained by mistake (or because the US was offering substantial bounties to its allies for al-Qaeda or Taliban suspects), and numerous insignificant Taliban conscripts from Afghanistan and Pakistan.

Beyond these previously unknown cases, the documents also reveal stories of the 397 other prisoners released from September 2004 to the present day, and of the seven men who have died at the prison.

The memos are signed by the commander of Guantánamo at the time, and describe whether the prisoners in question are regarded as low, medium or high risk. Although they were obviously not conclusive in and of themselves, as final decisions about the disposition of prisoners were taken at a higher level, they represent not only the opinions of JTF-GTMO, but also the Criminal Investigation Task Force, created by the Department of Defense to conduct interrogations in the “War on Terror,” and the BSCTs, the behavioral science teams consisting of psychologists who had a major say in the “exploitation” of prisoners in interrogation.

Crucially, the files also contain detailed explanations of the supposed intelligence used to justify the prisoners’ detention. For many readers, these will be the most fascinating sections of the documents, as they seem to offer an extraordinary insight into the workings of US intelligence, but although many of the documents appear to promise proof of prisoners’ association with al-Qaeda or other terrorist organizations, extreme caution is required.

The documents draw on the testimony of witnesses — in most cases, the prisoners’ fellow prisoners — whose words are unreliable, either because they were subjected to torture or other forms of coercion (sometimes not in Guantánamo, but in secret prisons run by the CIA), or because they provided false statements to secure better treatment in Guantánamo.

Bizarrely, lawyers for the Gitmo detainees cannot use the leaked files in court because, for legal purposes, the documents are still considered classified. Nevertheless, government officials have made it clear that they are not very happy about the leak. In a press release issued by Pentagon Press Secretary Geoff Morrell, the government “strongly condemn[ed]” the actions of WikiLeaks and the news outlets that published the files. In a fit of sociopathic narcissism, Morrell even took some time to whine on his Twitter account about how WikiLeaks ruined his Easter — as if he and his buddies at the Pentagon were the real victims in all this.

Their displeasure at the leak is not particularly surprising, however, given the embarrassing and incriminating nature of the documents. The documents reveal some of the ridiculous pieces of “evidence” the government used to justify detaining people (did you know that the Casio F-91W, a popular wristwatch, is “the sign of al-Qaida?”). The files also prove that the government locked up many innocent people, often knowingly. All in all, the files show that about 150 innocent people have been locked up, according to The Telegraph‘s coverage. By The Guardian‘s estimation, the files show that almost half the of 212 prisoners captured in Afghanistan were either completely and totally innocent or coerced into fighting by members of the Taliban. The files also show that the British government sent prisoners to Guantanamo Bay even after learning that the US government was torturing its prisoners.

One highlight of the documents is the file on Sami al-Hajj, a cameraman for the TV news station Al Jazeera. Al-Hajj was locked up at Guantanamo Bay for more than six years where he claims he was sexually abused and denied medical treatment. The US government accused him of working for al-Qaida, but al-Hajj has said that he was interrogated almost exclusively about his work for Al Jazeera. Al-Hajj’s leaked file confirms his story. According to the file, al-Hajj was sent to Gitmo to be interrogated about “the al-Jazeera news network’s training programme, telecommunications equipment, and newsgathering operations in Chechnya, Kosovo and Afghanistan, including the network’s acquisition of a video of UBL [i.e., Osama bin Laden] and a subsequent interview with UBL.”

The Telegraph and Guardian have both stressed that among the innocents interned at Guantanamo Bay were a number of youths and elderly individuals. Naqib Ullah was just 14 when the military whisked him off to Guantanamo Bay. While doing an errand, Ullah was kidnapped by members of the Taliban and used for slave labor for several days before US forces raided the camp he was being held at. Ullah was then imprisoned and interrogated at Gitmo not because he was suspected of wrongdoing, but merely “because of his possible knowledge of Taliban resistance efforts and local leaders.” He was held for several years before being released. According to his file, government officials decided to release Ullah not because they cared about the fact that he was an innocent kidnap-victim, but because any “information [he might possess] does not outweigh the necessity to remove [him] from his current environment and afford him an opportunity to ‘grow out’ of the radical extremism he has been subject to.”

One prisoner, Mohammed Sadiq, was an 89-year-old man whose “medical issues include major depressive disorder, senile dementia and osteoarthritis” as well as prostate cancer, according to his file. After six weeks, interrogators determined that Sadiq was “not affiliated with al-Qaida,” but he was held for an additional four months. The file for Haji Faiz Mohammed is probably among the eeriest that I’ve read so far. Mohammed was 70 years old and suffering from dementia when he was transported to Gitmo. According to his file, “There is no reason on the record for [Mohammed] being transferred to Guantánamo Bay detention facility,” yet it took eight months for him to be released.

If you appreciate my work, please consider sending a donation via PayPal using the button below.