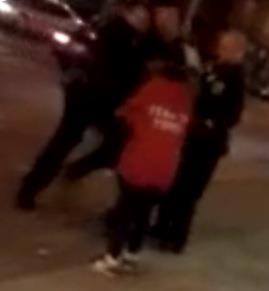 Tuesday night, while working on a story involving an Irondequoit, NY Police officer caught on video harassing a 15-year old skateboarder and his friends, I received message from a young man who follows my work.

After clicking the link, and seeing a disturbing video which shows Rochester, NY Police officer Lucas Krull driving a pregnant woman into a wooden porch bannister post, then punch her in the head, before throwing her on the ground, I thought “They did it again.”

You see, just a couple of months ago, I came across another disturbing video.

That video, which was posted to YouTube over a year ago, shows another white Rochester, NY Police officer (Lucas Krull is white), assaulting another pregnant, African-American woman, by kneeing her in her mid-section.

However, unlike the video of Rochester Police officer Lucas Krull beating Brenda Hardaway, which I not only helped go viral, but once again forced Rochester’s Coroorate-run, mainstream media to finally report on it (they usually ignore anything that shows law enforcement in a bad light, until I take a story national, then they can’t ignore it anymore), the video of the RPD officer kneeing the young pregnant woman, did not go viral.

In fact, it barely got a couple of hundred hits.

And of course, Rochester’s Corporate news media never reported on it.

Shame on Rochester, NY Police Chief James Sheppard, who defended RPD officer Lucas Krull beating a pregnant woman, dismissing Krull’s punch to her head as nothing more than a “distractionary technique”, meant to “change her channel”, and who allows rogue, white officers to abuse, and beat minorities in Rochester, NY, on a daily basis.