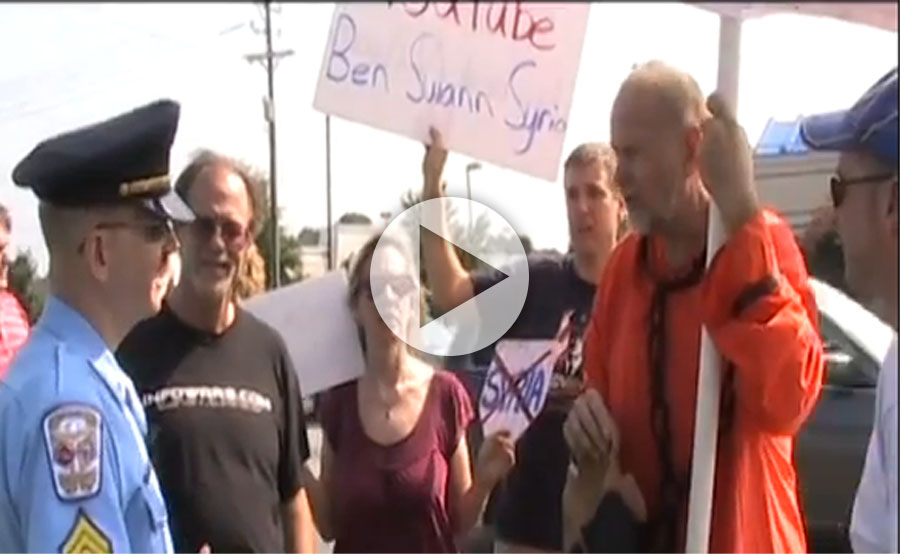 Joshua Cook submitted the following article, which he originally posted at BenSwann.com, via CopBlock.org’s submit page.

On Saturday, thousands of citizens throughout the nation protested military strikes against Syria. A group of activists assembled at the busiest intersection in Spartanburg, S.C. to wave signs and bring awareness to the ongoing push to strike Syria by the Obama administration. A local police officer told them that if someone complained they would have to leave because they did not have a city permit. He also said that activists who continue to protest on the crosswalk would go to jail.

Many of the protesters considered this to be a violation of their 1st Amendment right and challenged the officer by asking him if they committed any crime. They also reminded the officer that they had a right to assemble on public property such as a sidewalk and did not need a permit to do so. Evan Mulch, the organizer of the protest, told the officer that in the future he would not apply for a permit but would let the police department know when they plan to do the next event.

One protester asked the officer, “What about our right to assembly?” The officer said, “Like I said, you have to fill out a form.”

Dr. Bill Bledsoe asked the officer, “What laws am I breaking and are you arresting me?”

“No,” replied the officer. “What I was explaining to him was that you have to have a permit to assemble,” said the officer.

Bledsoe said, “You do not have to have a permit to walk across the street holding a sign.”

One protester told the officer, “You are pledged to support the Constitution, that’s the #1 law!”

Evan Mulch, the one who organized the protest, told the officer, “What you are conditioning us to do is to ask you for approval to be in a public place – we don’t need your approval.”