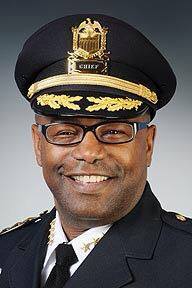 Tensions in Rochester, NY’s African-American community continue to rise, just days after a disturbing video was posted to YouTube, showing Rochester, NY Police officer Lucas Krull, driving 21-year old Brenda Hardaway, who says she’s 5 months pregnant, into a wooden porch railing, then punching her n the head with a closed fist, before throwing her to the ground.

“Release her or they’re going to see something they’ve never seen before”, said the clergymen who held an 11:00 am press conference at Faith Temple Apostolic Church Friday.

The statement was in reference to Brenda Hardaway, who was remanded to the Monroe County Jail in lieu of $7,500.

Hardaway is being held on several charges including resisting arrest, and disorderly conduct.

Her 16-year old brother, Geomeno Hardaway was charged with disorderly conduct and resisting arrest, and was released.

Meeting with other church leaders, Bishop Jerry McCullough said, “This has been happening in Rochester for quite a while and we’re appalled”

McCullough added, “We’re here to do something about it, we got lawyers, we got money, we’re hiring people to help us.”

According to Rochester, NY police, Brenda Hardaway interfered with the arrest of her 16-year-old brother.

“All she had to do was put her hands behind her back and be handcuffed,” Mazzeo said, adding “The protocol is to use the amount of force necessary to make the arrest.”

As an activist against police misconduct, and corruption, I have been marching these same Rochester, NY streets since the mid 1980’s, when I used to accompany my Dad, Mario Vara, a community activist against police abuse, and Al Sharpton, who was good friends with my Dad, along with the late Reverend Raymond Graves, a legendary Rochester civil rights leader, I personally saw all these great men, not only talk the talk, but walk the walk as well!

But, I asked them, what would they do different this time?