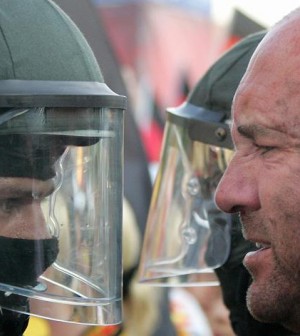 This post by Andrea Dantzer was originally published at TheStateWeekly.com. I think the article speaks for itself. -Kate

These days, it doesn’t seem to take too long to find yet another example of the rising police state in America. However, that assertion is often met with resistance and the claims that calling the US a police state is just fear-mongering, and after all, we are still the freest nation in the world. But, are we? Is calling the United States a police state just anti-government rhetoric used to incite fear against the government or are there legitimate signs and warning signs that the police state is here and only going to get worse?

So, that there is no confusion in looking at the signs and so that everyone is on the same page, here are some definitions that will shed light on the way in which the police state is defined.

The Merriam-Webster dictionary defines a police state as one in which a political unit characterized by repressive governmental control of political, economic, and social life usually by an arbitrary exercise of power by police and especially secret police in place of regular operation of administrative and judicial organs of the government according to publicly known legal procedures.

Arbitrary: 1: depending on choice or discretion; specifically : determinable by decision of a judge or tribunal rather than defined by statute. 2  a: (1) : arising from unrestrained exercise of the will, caprice, or personal preference : given to expressing opinions that arise thus (2) : selected at random or as a typical example b : based on random or convenient selection or choice rather than on reason or nature.

From Wikipedia: The term police state describes a state in which the government exercises rigid and repressive controls over the social, economic and political life of the population. A police state typically exhibits elements of totalitarianism and social control, and there is usually little or no distinction between the law and the exercise of political power by the executive.

Totalitarianism means: 1 a : of or relating to centralized control by an autocratic leader or hierarchy …
b : of or relating to a political regime based on subordination of the individual to the state and strict control of all aspects of the life ….

Often times, people think of a police state as one in which martial law as been declared, or that a 24-hour lockdown in place. Many others think of Nazi Germany when they hear the term, but think it can’t happen in a modern-day ‘democratic’ country (just for clarification, the Founding Fathers designed this country to be a Constitutional Republic, not a democracy). However, police states do not just happen overnight, a country does not go from being free, or relatively free, to a police state in a day. The noose just gets tighter and tighter slowly enough until one day, you run out of air and realize you are at the mercy of a totalitarian regime.

But, is that really happening in America? Here are just some, but certainly not all, of the many signs and warning signs that indicate we may be approaching full police statehood.

Sign: Whistleblowers are killed, jailed or have to seek asylum in non-extradition countries

Occurrences in the USA: Here are just six of the many whistleblowers that have been charged with violating the espionage act since Obama has taken office.

Sign: Increased Surveillance of Citizens…i.e…Big Brother is Watching You

Occurrences in the USA: While the fourth amendment of the Constitution states: The right of the people to be secure in their persons, houses, papers, and effects, against unreasonable searches and seizures, shall not be violated, and no Warrants shall issue, but upon probable cause, supported by Oath or affirmation, and particularly describing the place to be searched, and the persons or things to be seized. – Fourth Amendment to the United States Constitution , there are so many examples of the violation of this to name here, there are a few glaringly obvious ones that have to be called out.

“Domestically, state and local law enforcement entities represent the greatest potential users of       small UAS [unmanned aircraft systems] in the near term because they can offer a simple and cost effective solution for airborne law enforcement activities”

5. RFID Chips being used to monitor students  – From US News: A public school district in Texas can require students to wear locator chips when they are on school property, a federal judge ruled on Tuesday in a case raising technology-driven privacy concerns among liberal and conservative groups alike. U.S. District Judge Orlando Garcia said the San Antonio Northside School District had the right to expel sophomore Andrea Hernandez, 15, from Jay High School because she refused to wear the device, which is required of all students at the magnet school.

6. Automated License Plate Readers – From the ACLU: A little noticed surveillance technology, designed to track the movements of every passing driver, is fast proliferating on America’s streets. Automatic license plate readers, mounted on police cars or on objects like road signs and bridges, use small, high-speed cameras to photograph thousands of plates per minute. The information captured by the readers – including the license plate number, and the date, time, and location of every scan – is being collected and sometimes pooled into regional sharing systems. As a result, enormous databases of innocent motorists’ location information are growing rapidly. This information is often retained for years or even indefinitely, with few or no restrictions to protect privacy rights.

Occurrences in the USA – Again, while there is way too many to list here, here are ten examples of increasingly brutal behavior from the boys in blue.

Sign: Powerful And Continuing Nationalism – Totalitarian regimes love their slogans, symbols and images to drill in nationalism into their subjects.

Occurrences in the USA: From praising Obama in schools to a small child praying to Obama, it seems like nationalism is one step away from a recognized national salute. Sieg heil, anyone?

Occurrences in the USA:

Occurrences in the USA:

While there are many, many, many more examples, this does give anyone pause to reflect on how many personal freedoms are being stripped away on a daily basis. With just the few examples given here, which are really just the tip of the iceberg, are you convinced America is or is quickly becoming a police state? Do you have other examples you think should be added?