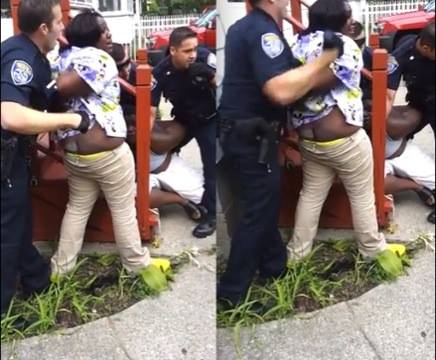 They lined up in their Sunday’s best.

Only it was a Friday.

Over a dozen African-American Rochester, NY clergy members spoke in front of news cameras and denounced the beating of a pregnant African-American woman, by RPD officer Lucas Krull, which was caught on video.

The video, which has gone viral, shows 21-year old Brenda Hardaway, yelling that she’s pregnant, seconds before Krull being drives her into a wooden porch railing post, punches her in the head, then throws her to the ground.

“Release her or they’re going to see something they’ve never seen before”, said the clergymen who held an 11:00 am press conference at Faith Temple Apostolic Church Friday, led by Bishop Jerry McCullough.

“This has been happening in Rochester for quite a while and we’re appalled”, McCullough said, before adding, “We’re here to do something about it, we got lawyers, we got money, we’re hiring people to help us.”

They talked the talk.

They just didn’t walk the walk.

At least not yet.

Here’s what I don’t get.

Over 2,000 members of Rochester’s African-American community, took to the streets and marched in downtown Rochester as part of the Trayvon Martin Million Hoodie March protests held in cities throughout the U.S.

But not one member of Rochester’s African-American community has organized any rally, march, or protest, despite a white cop caught on video punching a black pregnant woman in her head!

In fact, with election time right around the corner, Rochester City Council President Lovely Warren, who is African-American, and who is running for Mayor, and who was present at that Trayvon Martin Million Hoodie march, has been extremely careful in commenting on the disturbing 5-minute video which shows RPD officer Krull beating Hardaway.

Responding to a call for Rochester, NY Police Chief James Sheppard to resign, after he supported officer Krull’s actions, this is what Lovely Warren had to say:

“I have worked alongside Chief Sheppard to institute the “Policing in the Spirit of Service” model, to recruit minority and women police officers, to attend community meetings and to do youth outreach. He has been responsive, and I appreciate his willingness to come from behind his desk in public safety building and be personally present in the community. We cannot allow one incident to undo the good work that he has done, yet Chief Sheppard must take the lead to help the community understand the actions taken by the officer in question, and to repair and rebuild the community’s trust.”

They promised a march on City Hall.

I don’t see any of them there yet.

Even though Brenda Hardaway was just indicted, by a Monroe County Grand Jury.

Interestingly enough, just one week before the incident where RPD officer Krull was caught on video assaulting a pregnant woman, I attended a mini Mayoral debate forum where I asked Lovely Warren, if elected Mayor, what would she do about the out of control, rogue, Rochester Police officers. (See video above)