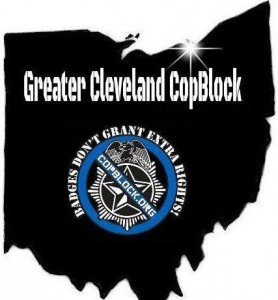 My wife and I went to enjoy a day out at a food truck event in Fairlawn, OH. We were out to get as much info as we could on the subject in order to see about doing our own food truck.

As we entered the event, I noticed a LARGE police presence, and thought, “Why?” Next thing I knew, I found out why. Apparently, in Fairlawn, OH, which is near Akron, they are so paranoid that you can’t take pictures at a public event. Silly me, I thought that was what public events were for. To have a good time, take pictures of that good time for memories sake!!

It was pretty cool otherwise. There was this huge malamute there that looked like a wolf! I went and got him some ice cubes to wet his whistle a little. I love dogs. But anyway…

I walk in and see these two cops standing there, and being a Cop Blocker, I took a picture of them. Then as I looked around, I noticed. There had to be at least one officer for every food truck, and there were at least 15-20 trucks!

At that point I had to start video taping because I felt the walls of justice surrounding me. I was wearing my shiny badge on my hat, so I know the two I took a picture of, saw it!

As I entered the event, I turned and noticed that the bald cop I took a picture of quickly approached his Sgt. and began informing him that I was video taping all of them, and that I had taken a picture of him. I immediately turned around and went up to the Sgt, and tried to shake his hand to introduce myself, but he refused the gesture 3 times.

I tried to explain to him that I was just video recording the event and the police presence there. I also told him that if his officer was unclear on that, that he should inform him of such! I then turned and went on my way and continued recording.

As I walked around the event, I noticed that all I saw were these same cops. It seemed like they were surrounding me. I was trying to get video of the menus and the logos and stuff for my wife. She is a great cook, and wants to maybe try her hand at a food truck. There was a band there, so I would’ve gotten that as well – if I had the chance!

After walking around a bit, Officer Sharpe walked past me so closely I could feel his breath on the back of my neck!!! He wanted to get a closer look at my badge obviously.

I went to order some food for my wife and I. I paid for it, took my drink and sat. As I was sitting there in the sitting area behind and in between the front of one food truck and the back of another, they couldn’t see me. All of a sudden from both sides I see these guys in blue peek around the corners…on both sides!!! (lol) Next, officer Sharpe came up and asked why I was video taping. I told him that I videotape all cops!. He said, “Oh yeah? I seen your badge there.” I told him it is not real and he read it out loud. “Shiny Badges Don’t Grant Extra Rights!” I said, “Yes, because some of your colleagues think that they do!”

Anyway, he asked like 3 times to see my ID, and I refused. He continued to press for my name and DOB. I gave it to him and told him that I tried to avoid this by talking to the Sgt. as soon as I came in – ignored, of course! He went to check it out, and I sat and ate. When I was done, I went to find the guy who illegally identified me.

I found him and confronted him about why he had to know who I was. He gave me a bunch of excuses, saying that people complained. The only one I heard complaining was the bald cop I took a picture of when I first came in! Watch the video. It’s all there. I mean, the video is edited, obviously, but the footage I have has all been used. I didn’t cut one frame out of it, and I have the raw video to prove it!