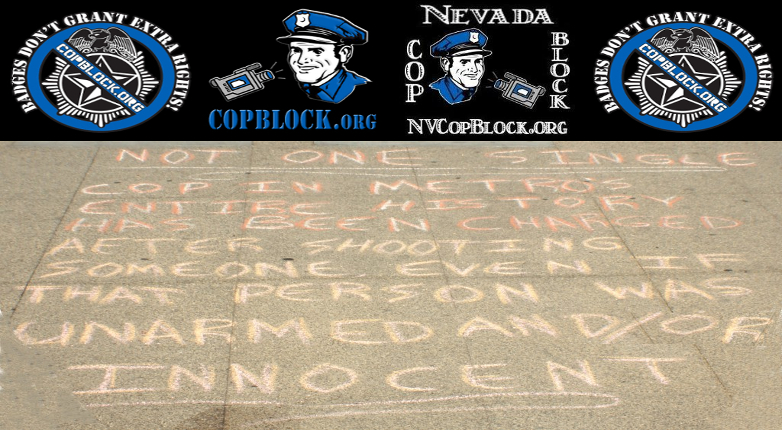 A Community in Fear

Not too long ago, I attended a meeting of the Clark County Commissioners concerning a vote over the process that would be adopted to address shootings by Las Vegas area police. Prior to the vote that eventually happened (after all the important stuff like giving a certificate to a group from a retirement home whose most lauded act was alerting neighbors if they forgot to close their garage door), members of the community were allowed to address the commissioners regarding the issue.

One speaker after another stepped to the microphone and it wasn’t long at all before a common theme began to develop. Statements such as, “I’m afraid of what will happen if I call the police,” “I would never call the police even if I was in real danger because I’m scared more of them,” and “I don’t trust them not to kill someone if I call them for help” were recited over and over again throughout the session. These fears were often accompanied by personal examples of negative experiences resulting from interactions with Las Vegas area police, including several from the families of people that actually had been killed by the police.

Legitimate Reasons to be Afraid

Obviously, every time the police respond to a call they don’t kill or otherwise abuse the people they encounter, even in Las Vegas. However, it happens often enough to instill the sort of fear and hatred toward them that was on public display during the commissioners’ meeting that day. The problem is that people within the community know that should something happen to them or one of their loved ones at the hands of a member of the Las Vegas Metropolitan Police Department they have very little hope of that cop ever being held accountable for their actions. They don’t know that the cop responding wants to kill them, but they do know for a fact that if they do they will get away with it.

The bigger problem is that members of Las Vegas area police departments also know this. Jesus Arevalo told his then-wife that he wanted to shoot someone so that he could get free time off, based on the policy of placing cops on paid leave during investigations. Within a couple of months after that statement, Stanley Gibson, an unarmed, disabled Persian Gulf veteran suffering from a PTSD induced panic attack and in no way representing a threat to anyone was murdered by Jesus Arevalo. Those seven unnecessary shots fired from Ofc. Arevalo’s AR-15 were the ticket to what is fast approaching two full years of the paid vacation that he had indicated he was hoping for. No charges were ever brought against him for his actions, which even other police on the scene characterized as unexplainable in their official statement to the detectives subsequently going through the motions of an investigation. At worst, Arevalo might possibly be punished by being fired.

A Long History of Corruption and Violence

Throughout their history, the LVMPD has consistently rated among the highest statistically nationwide (even when compared against cities with much higher populations) in times they have shot at people while on duty and in the level of fatalities resulting from those shootings. Stanley Gibson was just one of the latest names in the laundry list of the victims of Las Vegas police that includes Erik Scott (whose murderers were later given an award for bravery while gunning down someone from behind and then unloading their guns on him as he lay already dying on the ground), Trevon Cole, Orlando Barlow, Tanner Chamberlain, Deshira Selimaj, and Henry Rowe, among the 150+ shootings just since 1990.

Yet not one singular time in the close to forty year history of the Las Vegas Metropolitan Police Department has a Las Vegas area police officer ever been charged for shooting someone, regardless of whether the person shot was unarmed or even completely innocent of having committed any actual crime. One rather telling fact is that the reason the old Las Vegas city police was originally merged with the Clark County Sheriff department to create “Metro” was in response to an uproar after a very questionable shooting that was ruled justifiable. Yet, no matter how questionable the many shootings by Metro have been, the justifications have continued unabated.

An Absolute Refusal to Hold ANYONE Accountable

A recent incident has shined a very public spotlight on the reasons why it is so impossible to hold anyone within the LVMPD accountable for their actions. In one of the most questionable shootings ever Officer Jacquar Roston claimed to have confused a hat Lawrence Gordon was wearing for a gun and shot him in the leg as he sat in a car. As would be expected of anybody with even half a brain, Metro’s internal Use of Force Review Board didn’t really accept that excuse and recommended that Roston be fired as a result.

The fact that this recommendation was hailed as an “unprecedented” act by the board tells you a lot about the past history of the Las Vegas police in relation to officer involved shootings. The fact that Sheriff Gillespie promptly disregarded that recommendation in favor of a one week unpaid suspension (after Roston had already spent 8 months on paid vacation during the investigation) tells you a lot about the prospects for any sort of accountability for them in the near future.

However, in one glimmer of hope for some sort of prospect for justice, seven members of the board did actually have the integrity to stand up and resign in disgust after Gillespie’s disgraceful action. One former member of the board, Glenn Rinehimer, stated that previously the board had been “stacked” with retired police officers from other parts of the country designated as civilians. According to Rinehimer, they didn’t seem in any hurry to actually investigate whether shootings were justified. “The retired police just didn’t seem interested,” Rinehimer said. “They didn’t ask a lot of questions. They voted quickly for it to be justified.”

Robert Martinez, a co-chair of the board who also resigned, had previously expressed hope that this sort of rubber stamping had ended once former police employees and their family members were banned from being appointed as civilians on the board last year. He believed that Metro truly desired a fair and transparent process. That is until Gillespie essentially exonerated Roston despite the board’s unanimous recommendation. “I was thoroughly fooled,” Martinez said. “I thought it was going to change and it isn’t.” Within his resignation letter Martinez characterized the process as a flawed one that undermined the Use of Force Review Board.

Former Assistant Sheriff Ted Moody, who submitted for retirement in response to this case, agreed that Gillespie was undermining the credibility of the board even as Metro faces increasing scrutiny over questionable shootings and other scandals that are becoming hard to even keep up with lately. Las Vegas police officers will not have the public’s trust until the department has a credible process for reviewing its own shootings, Moody stated. And that process must be stable, impartial, unbiased and free from political interference. “Anything short of that is going to fuel further suspicion and mistrust and is just begging for the imposition of externally imposed oversight,” he said. “Nobody wants that. We can be better than that.”

Rinehimer went even further in his assessment of the problems with a system that is in practice designed to ensure no cop is ever held accountable. Rinehimer said the sheriff’s decision to overturn the Use of Force Review Board’s recommendation doesn’t set a good precedent, especially for officers who find themselves in similar situations in the future. “At the end of the day, the officer might be sitting there smiling, knowing the sheriff might not fire him anyway,” Rinehimer said. “It’s a farce.”

A Lack of Accountability that is Not Good for Anyone, Even the Police Themselves

There’s an obvious incentive for members of the community to demand accountability for the heavily armed band patrolling through the streets that they live and work. If those individuals are permitted to act as an occupying force with the impunity to do as they please to those within that community, those among their ranks that have an unscrupulous tendency will take advantage of that to commit criminal and violent acts.

However, there are reasons why even those within the local police departments should want to see accountability for those “Bad Apples” that we are always being told are just exceptions to the rules. Fear eventually gives rise to hostility and working within the bounds of a hostile environment makes someone’s job just that much harder to do. People within communities don’t feel real obligated to help with the investigation of crimes when the person doing the investigation is perceived as being as bad or worse than the people being investigated.

Having to deal with indifference or even active retaliation in the process only serves to make the job of the police more difficult and frustrating, which in turn makes them more bitter and cynical and leads to even more abuses. At some point, that downward spiral needs to be put to an end and the only way to do that is to create real accountability, rather than a hollow, toothless sham that does nothing but draw attention to the lack of it. And as Sheriff Gillespie recently found out, people are a lot less accepting of having their taxes increased in order to supplement the LVMPD’s budget during an almost daily barrage of news about yet another police scandal.