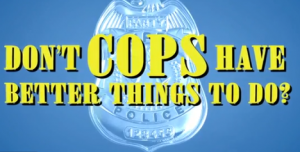 California suffers from one of the highest unemployment rates in the nation and the state is under court order to release 10,000 inmates, yet state agents are jailing people who manage to find home-improvement work. After placing ads on Craigslist, California State License Board investigators go undercover posing as homeowners, when landscapers, painters, and other contractors show up, the agents give them the “To Catch a Predator” treatment.

CSLB recently announced that agents from the Statewide Investigative Fraud Team (otherwise known by the tough-sounding acronym SWIFT) had completed operation “California Blitz.” SWIFTers busted 79 perps for contracting without a license, and if convicted, they could face $5,000 in fines and up to six months in jail. Fifty-two face additional fines for illegal advertising, and thirteen may be charged with requesting an excessive down payment, which can result in 60 days in jail and/or up to $10,000 in fines. SWIFT routinely conducts large-scale sting operations and proudly posts footage of the busts online. And since California is the nation’s second-most extensively and onerously licensed state (as noted by an Institute for Justice report), agents always have plenty of targets.

“CSLB and its partners in law enforcement are serious about enforcing California’s consumer protection laws,” says says CSLB Registrar Steve Sands. “Unlicensed, illegal activity that puts homeowners at risk and legitimate contractors at a competitive disadvantage will not be tolerated.”
-Matt Edwards