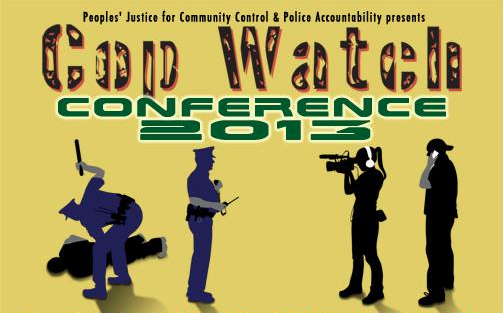 Not this weekend but next, the National CopWatch Conference is going down in the South Bronx.

The conference is being organized by those involved with Peoples’ Justice for Community Control and and Police Accountability, which was initiated by the NYC Coalition Against Police Brutality (CAPB), and allies.

If you’re in the Big Apple you should definitely go to connect with others in your community, share ideas and skills, and take another step forward to a reality free from institutionalized violence. If you’re elsewhere on the east coast (or even further away) get with some friends to split the fuel costs, or hop on Megabus or another means of transpo, and make a weekend out of it.

The more we’re connected not just online but in person the better we, who value justice, accountability, liberty, and peace, will be.

A few weeks back when in NYC, the second stop of the Police Accountability Tour, Jacob Crawford & I had the good fortune to meet a lot of the folks involved with the upcoming conference. Here’s a vid we made using footage captured at the unveiling of a mural with CopWatch & know-your-rights info:

No matter where you’re at be sure to connect with those in your area – it makes all the difference: CopBlock.org/Groups which includes known Cop Block, Cop Watch, Peaceful Streets and other police accountability groups

The text below is from the post Cop Watch Conference 2013! at http://peoplesjustice.org. It’s shared here in the hope that some readers will be inclined to attend the event, support their efforts from afar, and/or be motivated to take action in whatever peaceful way you think most effective.

This September 27-28, Cop Watchers and police accountability organizers from across the country will converge to share skills, practices, resources, and ideas. Over the course of two days of skills-building workshops, panels, performances and collective visioning, we will envision and develop a Cop Watch community that is stronger, more unified and better prepared to affect real change for & with our communities.

This Conference is specifically aimed at bringing together groups and individuals from WITHIN communities highly targeted by police abuse & violence, in order for our own communities to be empowered & organized to change the way our peoples are policed ourselves.

Presented by Peoples’ Justice for Community Control and Police Accountability, with support from the Center for Constitutional Rights.

Peoples’ Justice for Community Control and Police Accountability (PJ) is a New York City coalition of grassroots organizations working in Black, Latino, Asian and LGBT communities, led by Malcolm X Grassroots Movement, the Justice Committee, and CAAAV: Organizing Asian Communities. The coalition was formed in the wake of the 2006 New York City Police Department killing of Sean Bell and shooting of Trent Benefield and Joseph Guzman in order to respond to the incident and highlight the systemic nature of police violence. After verdict in the Sean Bell case, the coalition took on a more proactive approach and developed a long-term strategy to contribute to the movement for police accountability through community education, empowerment and organizing. Currently this strategy is being advanced through Know Your Rights training and outreach, as well as organizing Cop Watch teams and expanding the “culture of Cop Watch” throughout our communities.