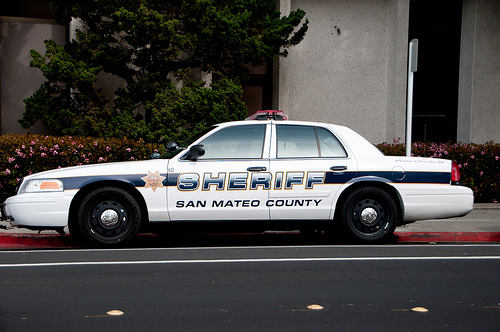 No Longer Trust Government shared the following post via CopBlock.org’s submit page, noting that it’s important for the readers to see that cops are caught repeatedly in sexual attacks and then PAID to sit around for months while they are being investigated.

An eight year employee of the San Mateo County Sheriff’s Dept has been charged with seven felonies for sexually molesting his own young relative.

Of course, he is on PAID “administrative leave,” a government perk that only government criminals are allowed to have. Nobody in the private sector gets PAID leave when charged with a crime that prevents that person from actually working.

See San Francisco Chronicle‘s article on the situation below:

Underwood was booked at County Jail in San Jose on Thursday. His bail was set at $2 million.

The investigation began last week when the girl disclosed the alleged abuse to a counselor, who notified authorities, Scott said. He said the crimes occurred at two different locations linked to the family in Santa Clara County.

Underwood has been placed on paid administrative leave. He has been a deputy since 2005 and was assigned to patrol unincorporated Menlo Park and Redwood City before being placed on disability several months ago, said Deputy Rebecca Rosenblatt, a sheriff’s department spokeswoman.

Richard Pointer, Underwood’s attorney, declined to discuss the allegations but said his client has had an “impeccable record” with the sheriff’s office since joining the force after a 13-year career with the Air Force.