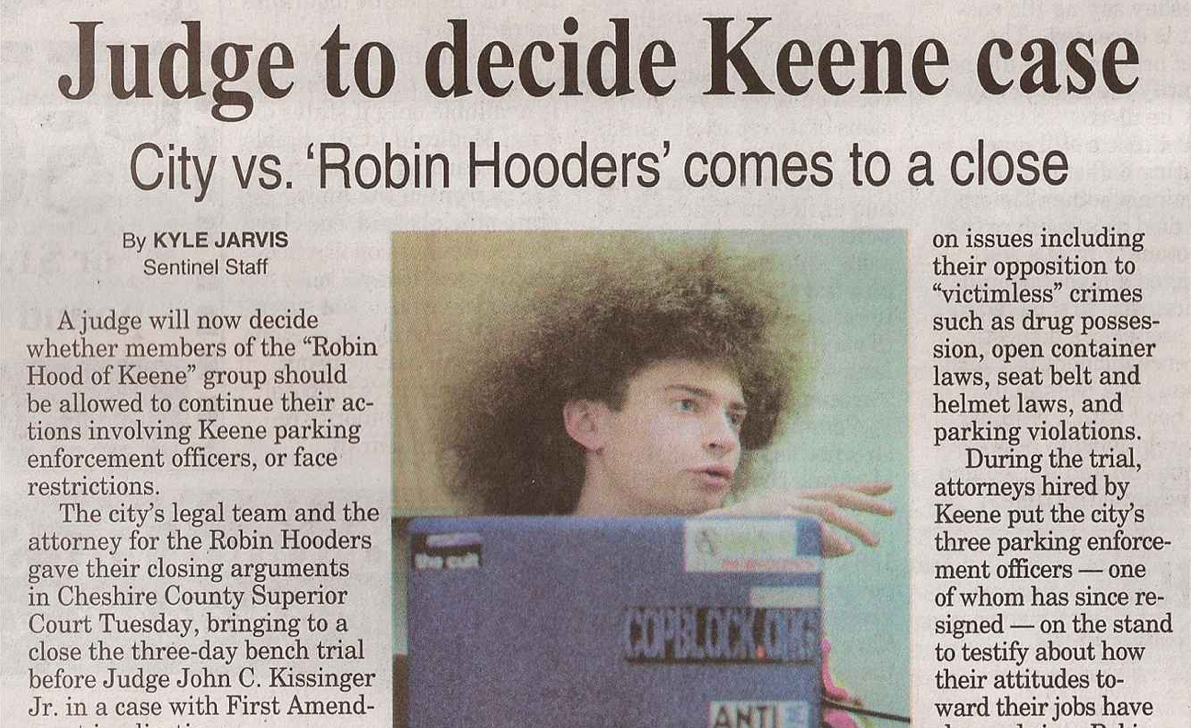 Earlier this year some individuals employed at a corporation called the “City of Keene” announced their desire to target do-gooders they lumped together as “Robin Hood” and have anti-freedom zones created around their agents to dissuade, under the threat of force, the peaceful, proactive, ransom-denying actions employed.

Over the span of over two months, three days of testimony from those said to be involved were heard by Kissinger, who will share his thoughts on this issue on/after October 9th.

Judge to decide Keene case: City vs ‘Robin Hooders’ comes to a close by Kyle Jarvis at Keene Sentinel on Oct. 02, 2013

Whatever the proclamation made by Kissinger, anyone with commonsense recognizes that the claims made by Mullins and his ilk are a farce and a gross waste of time and resources.

Said Ian Freeman, one of the six individuals targeted by Thomas Mullins – the man who’s spearheading the witch hunt on behalf of his corporate employer:

My goal when I’m Robin Hooding is to save people the heartache from getting a ticket, and hopefully make people feel good . . It’s essentially a threat (to issue a parking ticket), and I don’t appreciate threats. . .I believe that all human interaction should be consensual, and not use threats of violence or actual violence to get their way

Mullins has sought to have his threat “legitimized” through legaland (aka Superior Court), and hired (at taxpayer expense) Charles Baur and his cronies to peddle legalese snake oil to John C. Kissinger.

[Mullins later dispatched his comrade Joseph Dirusso to steal the videocamera of so-called “Robin Hooder” Garret Ean. The property has since been returned yet no one has been held accountable. Ean has yet to even receive an apology. Such are the operations of a criminal enterprise…]

Those present in legaland provided updates via Twitter using #robinhoodtrial

Perhaps recognizing the futility of this attempt, agents of the “City of Keene” corporation recently filed a second suit seeking to shake-down the six dubbed “Robin Hood” claiming that they should be responsible for the legaland fees racked-up. Huh? This, despite adamant claims that their efforts were not driven by monetary reasons.

Background video “Robin Hood of Keene Targeted by the King’s Agents” posted on May 18, 2013