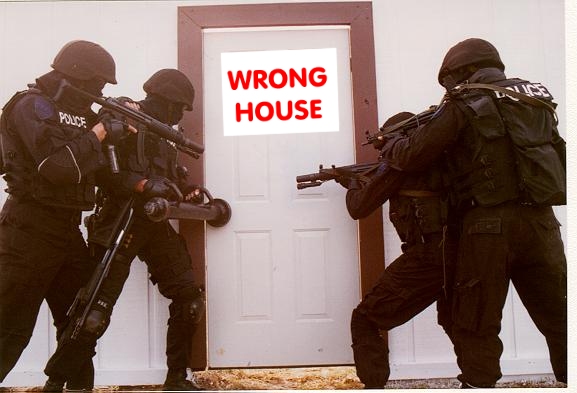 This post was shared via CopBlock.org’s submit page, anonymously.

This morning, my husband and I woke up to someone pounding on our door. When we answered it, there were several police officers in the hallway of the building we live in. They asked us to step outside and wouldn’t let us close the door. Without telling us what was going on, they separated us by bringing me inside while keeping my husband outside (note: brought me inside, I did not bring them inside).

The officer with me looked through my bathroom, kitchen, and living room before telling me what the problem was. He told me that my father had called the police saying that my “boyfriend” hits me. I told the officer that no one hits me; the officer then inspected my face which was obviously not beaten. He asked me for my ID and the name of my father and I gave him both. He was very rude to me and continued to ask me about my father, when I spoke with him last and how my relationship with my “boyfriend” was. He repeatedly told me, “We’re here for a reason.”

He searched our computer room (he opened the door to the room after asking me who was in there, to which I replied no one), and then our bedroom. He continued to ask me who else was in the apartment. even though I kept telling him no one else was there. It was as if he was trying to trip me up. Eventually, after a time of questioning, another officer entered my apartment and called me by a different name. I told him that person lived next door. During this time, they were also questioning my neighbor and she eventually revealed to them that she was in a violent situation. They left our apartment and thanked us. These men invaded my apartment and treated me like a criminal while operating on insufficient information about their purpose.

Is this a common occurrence with domestic abuse calls? To search the wrong home? I was terrified and my husband wasn’t allowed to use the bathroom (like I said we woke up to this). I feel as though these officers made a mistake and my husband and I took the brunt of it.