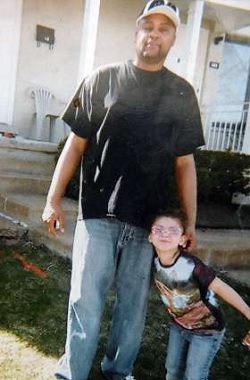 This article was brought to my attention by Pete Eyre, who is currently on The Police Accountability Tour.

Jack Lamar Roberson was shot and killed by police in his home on Friday afternoon in Waycross, Georgia. According to local TV station First Coast News, his fiancée Alcia Herron called 911 for an ambulance after becoming worried about diabetes medication Roberson had taken. Cops claim Roberson was brandishing two weapons (not identified by police, though the mayor said he was told it was a knife) and came toward them “aggressively armed”. Police also say they were informed Roberson had attempted to commit suicide and was being combative while on their way to his residence. His mother and his fiancée both witnessed the shooting, and their 8-year-old daughter was apparently in the home too.

Roberson’s mother said the family didn’t own “two decent knives” while his fiancée described the incident to First Coast News:

“He didn’t have nothing in his hands at any time or period at all before they came, any time while they were here, anything. They just came in and shot him. He didn’t say nothing, the police didn’t say nothing, anything, it was like a silent movie. You couldn’t hear anything, all you could hear were the gun shots go off and I seen them going into his body and he just fell down,” cried Alcia Herron, Roberson’s fiance. Herron told the Florida Times-Union she became afraid for Roberson, believing he may have taken too much diabetes medication, though did not appear to provide more details anywhere. The Georgia Bureau of Investigation is reviewing the shooting and the officers involved are on paid leave.

This story is just one of many, many sad examples of how calling the police can make almost any situation worse. If it were not for the unidentified individuals calling themselves “Waycross Police Officers,” this man would still be alive, and his family not traumatized. If you have any questions or comments for those involved in the shooting, feel free to contact the Waycross Police Department.

Cop Block offshoots in the area: