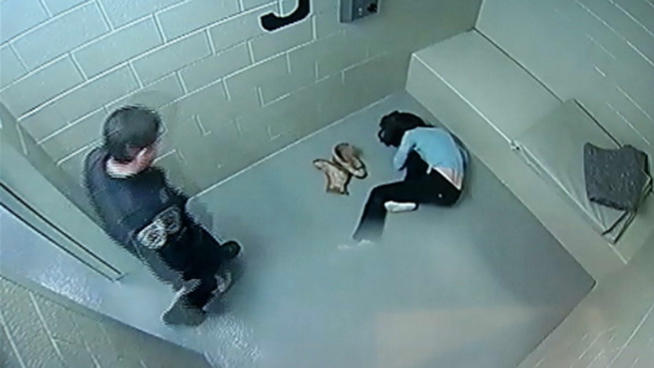 This post was shared by Dan via CopBlock.org’s submit page.

A Chicago woman is suing a nearby village and one of its police officers, claiming she suffered serious injuries after being violently thrown into a jail cell in a shocking incident caught on videotape last year.

Cassandra Feuerstein, 47, said in a federal lawsuit against the Skokie Police Department that the March 10 incident required facial reconstructive surgery and the insertion of a titanium plate to “replace the bones that had been shattered,” the Chicago Tribune reports.

A portion of the alleged incident was captured on jail video cameras, which Feuerstein’s attorney, Torreya Hamilton, released Wednesday.

“The video speaks for itself,” Hamilton told the newspaper. “She does nothing to justify what this male police officer does.”

The video depicts officers searching Feuerstein inside a jail cell, where she was apparently asked to remove her boots and bra before being removed for additional processing. An officer then grabs the woman by the arm and appears to push her back into the cell. She is then shown striking her head and face on a bench before paramedics respond.

“If this was a tavern fight, which of course it wasn’t, it’d be like she got sucker-punched,” Hamilton said.

The lawsuit, which seeks unspecified damages, also claims the officer made false statements to other officials in the Skokie Police Department about why he pushed the woman into the cell.

“The village of Skokie has not yet been served with any documents,” said Ann Tennes, the suburb’s marketing and communications director, on Wednesday. “When, and if, we are served, our counsel will review them.”

A police spokesman said Skokie’s police chief, Anthony Scarpelli, was unavailable for comment. Skokie officials confirmed that the accused officer, who could not be reached, was still a village employee, the newspaper reports.

The incident, all captured on video, shows the petite 110-pound woman calmly following directions, posing no threat or aggression to her captors. The footage — subpoenaed by Feuerstein’s lawyer — shows the woman being asked to leave the cell, and after a few brief seconds, brought back to the cell and shoved in at full force.

Feuerstein was launched into the cell by Skokie Police Officer Michael Hart. Literally using both hands to shove her, the small woman helplessly sailed into a cement bench… face first. The results were devastating. Her face was shattered.

As a pool of blood began to pool on the floor, officers scrambled to do something. One officer, who Feuerstein described as “kind,” cradled her on the floor as she bled. Her thuggish assailant, Michael Hart, did not seem the least bit remorseful and was described as “totally unapologetic” by the victim.