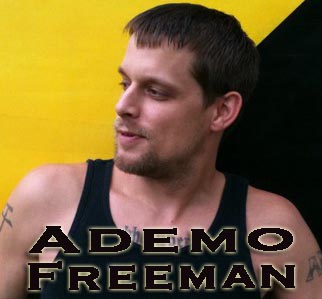 Well, it’s been almost a year since I’ve made a blog post here at CopBlock.org, but before I explain where I’ve been, why I haven’t posted so much and so forth, let me rewind a little bit for some of the new readers.

I’m Ademo – the Founder (along with Pete Eyre)  of CopBlock.org – and just over a year ago I was in jail for “wiretapping” public officials, as well as using children’s chalk on a police station. It was the longest stretch of time I’ve done and the last time, or so I hope, I ever walk myself into a cage again. Yep, my time in jail didn’t do me any favors, as is the case for anyone who has been behind bars. After being released, I took some time off and did some serious soul searching. During that time, I attempted to launch “CopBlock.org Protection,” which I believe is the first step to affecting change within the policing industry today. I believe that nothing will change with police (or the service of protection) until someone offers the solution to the state funded and operated protection system we know as policing today. As much as I wanted to be the guy to take CopBlock.org to that next level, I felt that starting such a project would only enlarge the target on my back, so I ended my involvement with CopBlock.org Protection.

Some folks would say I’ve left CopBlock.org, that I’m damaged goods from being arrested so many times, having spent time in jail and so on. Honestly, some of that might be true, but only to the point that I’ve learned from my interactions. I most certainly don’t like being kidnapped and caged, who does? From 2011 – 2012 I was arrested over a dozen times, did time in over 6 different lock ups and caught 3 felonies. I’m tired, but not of what you think.

What I’m tired of is their game. I’m tired of going out with the good intention of educating others, while holding (all) folks accountable, and ending up in a cage for doing nothing. I’m tired of playing with the police on their terms and in their playground (court). They make the rules, they run the show and no matter how many times you can point out the hypocrisy of their jobs, it’s YOU (or me) that end up paying the price. Even when you ‘beat’ them, like Pete and I did in Mass, you still lose. You lose time, energy and wealth (resources).

I know those of us who go above and beyond our ‘call’  by taking the message of CopBlock.org to the streets, meaning those who’ve dedicated their lives to being an ambassador of a cause, are doing so at a great expense. Whether that be financially, personally or in hours of sleep lost – many put their lives, literally, on the line to make the point that “Badges Don’t Grant Extra Rights.” These days I’m not so bold, brave or ambitious in this area. Sure, I tell everyone I can about CopBlock.org, I still assist folks with their CopBlock.org related projects and do interviews from time to time, but CopBlock.org is not my life. My life is just that, mine, and I won’t let a single jack booth thug have any effect on it.

I may not blog 7 days a week like I did for the first year plus of CopBlock.org’s existence. I may not go out on active CopBlock outings, or join the most recent tour (though the thought did crossed my mind). Nevertheless I’m still a CopBlocker. I’m just playing a different game these days. I only film police when I stumble across them, or if they’re directly in my neighborhood – like outside my house. I refuse to play by their rules and I’m of the mindset that when I do (film police), it’s on my own terms. If the police arrest or harass me, we’re not going to settle it in their playground anymore. They’re going to have to come play in mine.

Here are some of the videos I’ve posted to my personal YouTube (since it’s connected to my phone) since my time off from CopBlock.org. I hope you enjoy them and remember, “Badges Don’t Grant Extra Rights.”