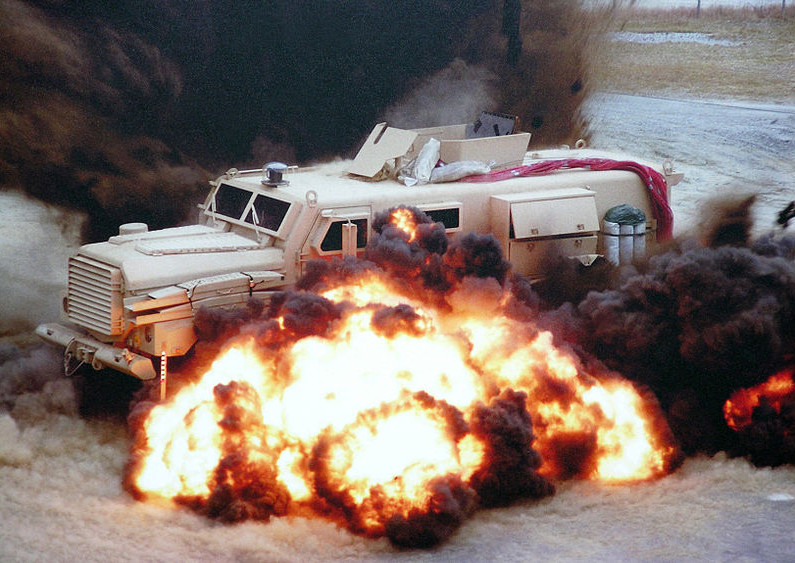 Those involved with the criminal protection racket referred to as the St. Cloud Police Department recently acquired a Mine-Resistant Ambush Protected (MRAP) military vehicle. Do you think inhabitants of St. Cloud, Minnesota, a college town of 65K in north-central Minnesota, would choose to fund such a purchase?

Giving others the sole ability to create “law” and interpret “law” and enforce “law” creates perverse incentives, manifested now in the distribution of MRAPs to “law enforcement” outfits within the arbitrary political boundary called the united states.

All experience hath shewn, that mankind are more disposed to suffer, while evils are sufferable, than to right themselvesby abolishing the forms to which they are accustomed. – Thomas Jefferson in the Declaration of Independence

Last month Ohio State University police outfit added to their stable a 19-ton armored truck. Said Hunter Stuart who did a write-up about it at HuffPo:

The 19-ton armored truck (specifically, a “MaxxPro,” manufactured by the Illinois defense-vehicle maker Navistar) is built to withstand “ballistic arms fire, mine fields, IED’s, and Nuclear, Biological and Chemical environments,” according to its product description. with an absence of IED’s buried in the roads of Columbus, Ohio, what does OSU need this thing for?

This is exactly what happens when group A steals from group B under the guise of ‘protection.’ If allowed, that establishes a double standard, which will only grow in size and scope until disallowed.

It places some as rulers and others as subjects (citizens). As time passes more money is claimed owed. And more rights are claimed to be usurped.

In addition to the MRAP now in St. Cloud, a half dozen are now controlled by sheriff outfits the Minnesota counties of Dakota, Pine, Sherburne, St. Louis, Olmsted and Wright. I lived in MN for a dozen years – it’d be hard for me to name one person there who favors such paramilitarism. There or anywhere. Save of course for the police employees and their cronies who construct the vehicles.

If you don’t stand today for what you know correct it’ll only be more difficult tomorrow.

The Department of Defense’s Law Enforcement Support Office has been providing used military devices to law enforcement agencies since the passage of the 1997 National Defense Authorization Act. Since its inception, $4.2 billion in military property has been transferred to police departments in every state, according to the Defense Logistics Agency website. The initiative for MRAP vehicles began in 2007 to help protect troops in Iraq against explosive devices. By 2010, Congress allotted $34 billion for the transport and construction of MRAP vehicles, according to a report by the Congressional Research Service.

I’d heard about PDs getting military gear, but I couldn’t believe my eyes when I drove through their lot and saw not only an MRAP, but a military surplus towable fuel tank, a police painted deuce and a half, two Humvees and a SWAT van all tucked away around the crumbling asphalt.

Both the Boise and Nampa police departments received Mine-Resistant Ambush Protected vehicles — or MRAPs — that have been used in Iraq or Afghanistan.

The world isn’t as scary as those who claim to protect you portray. They subsist on that fear mentality peddled through the lamestream media. As Larken Rose makes clear in the video The Tiny Dot, when you think of it, it’s really just a tiny fraction of folks who cause the bulk of the unwanted actions in your life. Such is the “service” provided when you’re told, at the barrel of a gun, that you have to be their “customer”.

People prefer peaceful interactions to coercive interactions. Let’s make that the norm and hold accountable those who act otherwise.

Some folks active with the ACLU have decided to allocate efforts to curtail such vehicles:

Since March 6th, ACLU affiliates in 25 states filed over 260 public records requests with law enforcement agencies and National Guard offices to determine the extent to which federal funding and support has fueled the militarization of state and local police departments. Stay tuned as this project develops.

If you find their tactics effective perhaps replicate them in your area. Or if you have other ideas run with them. Or solicit feedback and/or connect with others to implement http://copblock.org/submit