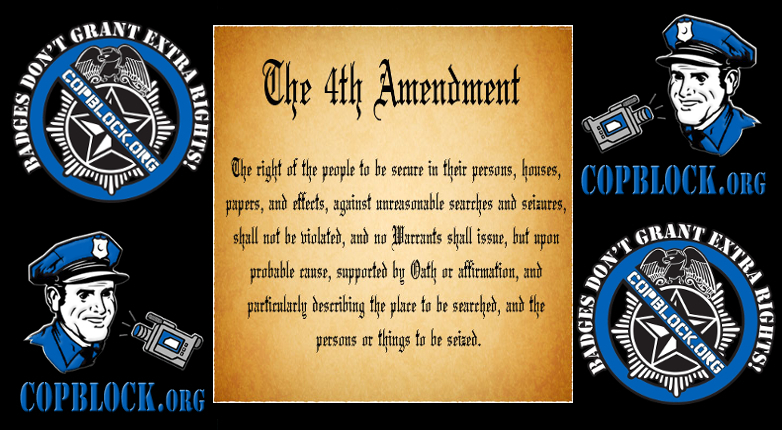 The following post was shared with the CopBlock Network by “DM,” via the CopBlock.org Submissions Page.

Two nights ago, I was in my home eating dinner by myself. Someone knocked on the door, but I didn’t answer. The doorbell rang; I still didn’t answer. There was pounding on my front window, so I got up to see who it was. I saw a San Bernardino Deputy. I had dogs going crazy, so I stepped on my porch. He asked me if I know some dude I have never heard of and I explained that I have owned the home for thirteen years and that name has never come up at my address. He again asked if it’s possible that he is in my home and I told him it wasn’t.

I then stated I thought he was there because of my daughter, who gets into trouble and that deputies have been to my home dozens of times for. He said he knows my daughter. He then asked me if I had any identification on me and I said no. He then asked me my name and this is where the trouble for me started. I asked him why he would need my name when I already told him I don’t know who he is looking for. I then asked him if I was legally required to identify myself on my own property and he said yes. I asked which law states this and he said he had a warrant for a person’s arrest and that he was conducting an investigation. I explained that I am the homeowner and if he needed to know who I am then he could run a records search on my address or my vehicles, but that I was not going to provide him my name.

I asked if I was being detained or free to go and that’s when he told me to turn around, then he handcuffed me. I didn’t like this. He said if we were going to play games, we would play by his rules. I told him not to put me into the car and that I would give my name at this point, because I didn’t want to be put into the car. He not only put me into the car, he twisted the cuffs to make it more uncomfortable. He got in the front seat as I was arguing with him that he was violating my civil rights. He then told me he was now going to search my home. I did not give him permission.

He left the car. I could not see my home from the car. After twenty minutes, he came back and read me some garbage about how helping a fugitive is a felony and I told him to just take me to jail. Oh, I forgot, I had asked for a Sgt. to be present when he went to handcuff me, and he showed up with four other deputies. Arguments about going into my home were abundant. The deputy decided to charge me with resisting and delaying. The Sgt. was equally as useless. I am not saying I was Mr. Perfect, but I don’t know a law on the books that says one can charge me for being firm in my beliefs and rights. The deputy thinks otherwise. Now I need to go to court to defend myself against a $1000 fine and a year in jail. Any advice?