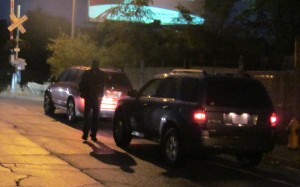 On Saturday night, nearly the entire Gary Police Department was involved in some type of activity that no one seems to be able to explain. The Gazette received several tips regarding some type of police activity at 11th and Grant Streets in Gary. Upon arrival, the photograph below of two code enforcement officers sitting along the side of the road was taken. Shortly thereafter, several Gary police officers arrived and I was ordered to leave the area. Witnesses allege that up to 9 Gary Police Officers were at the scene on a Saturday night. At least 6 were there for several hours and at least one camped out at the property overnight. Scanner traffic said a “break in” was reported.

Now, a Gary business owner is claiming that the administration of Mayor Karen Freeman-Wilson is using the federally funded code enforcement department to retaliate against him due to his criticism of the Administration.

Business owner Andy Young states that he has had several issues with various properties throughout the City. One of his properties is in the footprint for the Gary Sanitary District Ralston Lagoon project near the Gary airport. Young states that the city has seized that property illegally and threatened him with arrest if he attempts to access it. Despite an EPA mandate to resolve the matter by 2009, that case was just brought to Court by the City in 2012. And even now, as 2013 winds down, the case still lingers, although the GSD has effectively taken control of the property as of several years ago.

The question remains, who ordered all of this police activity. It is clear that a police officer would not “sit” on a property overnight without specific direction to do so. Chief Ingram stated clearly that he knew nothing about the incident when asked on Monday morning. A request for information to the Mayor’s Office was met with the following statement from Chelsea Whittington:

Currently a statement is being crafted by our legal department for distribution. We are working to meet your 5 o’clock deadline however if we are unable to oblige, you will receive the statement tomorrow. We respectfully request that you do not print that the mayor’s office was unavailable for comment and let this email serve as correspondence.

That letter was yesterday and a follow-up conversation with Ms. Whittington today resulted in her asking the Gazette for press “credentials.” Apparently, they have not finished crafting that response. Calls to code enforcement supervisor Kenya Maclin were not returned.

If you have been the subject of code enforcement action, please let us know about it at ken@northwestindianagazette.com.