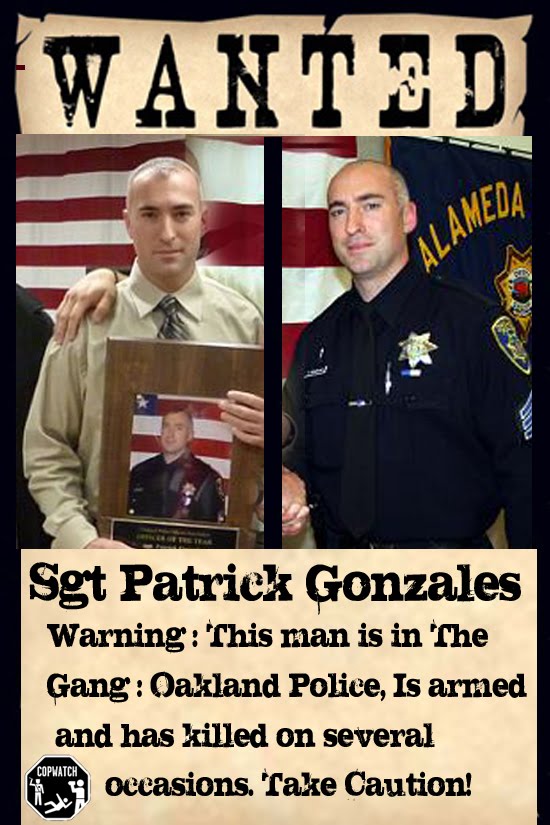 On November 9th, 2013, activists marched in Oakland, California against police murder and brutality, in solidarity with Santa Rosa, CA. They marched for the murder of Andy Lopez by Somoma County deputy sheriff Erick Gelhaus and with/for the families of other victims of police violence. At the beginning of the march, as soon as demonstrators turned the corner they were met by Oakland Police Sergeant Patrick Gonzalez. Sergeant Gonzalez is the officer who murdered Gary King by putting two bullets in his back. As the crowd surrounded his patrol unit and shamed him publicly, Gonzalez called for back up. Sergeant Gonzalez has been the subject in many lawsuits against the city of Oakland, CA and has an extensive history of violence towards those that he is sworn to protect and serve. You can learn more about SGT. Gonzalez on FaceBook – Californias Deadliest Cops. Here is a little bit more about Gary King’s killer. Notice how the more violent he gets, the more stripes he gets.

Meet Oakland PD Officer Patrick Gonzalez. Watch as he calls in the goons as he is surrounded by peaceful demonstrators and put to shame for his reputation as a cold-blooded murderer and violent history towards the citizens of Oakland, CA.

Patrick Gonzales is a Sergeant with the Oakland Police Department.

In 2000, Sergeant (then Officer) Gonzales was accused of publicly strip searching and cavity searching a man, before physically abusing him. The Oakland Citizens Police Review Board (CPRB), voted to not sustain this claim of misconduct.

In 2001, Sergeant (then Officer) Gonzales was again accused of misconduct, this time pistol whipping and kicking a suspect after a drug bust. The CPRB again sided with the officer and did not sustain this claim of misconduct.

In 2002, Sgt (then Officer) Gonzales had his first “officer involved shooting.” He shot a suspect who pointed a gun at the officers. He was cleared of misconduct by the Alameda County District Attorney and the police department (investigations by homicide and internal affairs).

In 2003, the department was involved in heavy use of force at a peace protest at the Port of Oakland that eventually led to their Crowd Control Policy and payout of over $2 million. Sergeant (then Officer) Gonzales was seen on video firing lead fill beanbags directly at protesters.

In 2006, (then Officer) Gonzales was involved in another officer involved shooting when he shot Ameir Rollins who was holding a gun and is now paralyzed. The city settled for $100,000.

In 2007, Sgt Gonzales was involved in his next officer involved shooting, this time a fatal one. After beating and tazing Gary King, Jr., who may or may not have been the murder suspect he was looking for, he shot him twice in the back, killing him on the scene. Gonzales claimed King was reaching for a gun in his waistband; witnesses and family members claim he wasn’t and that the gun was planted. Although the city claimed no wrongdoing, the city settled in 2009 for $1.5 million. Howard Jordan, Assistant Chief at the time, claimed that, “He fired in defense of his life at an armed and dangerous subject.”

On March 21st, 2009, four Oakland police officers were shot, and OPD has been criticized for the handling of the incident. Two officers were initially shot, leading to a large manhunt. When they found the suspect, Lovelle Mixon, hiding in his sister’s apartment, Sgt Gonzales led the entry team. The entry was not thoroughly planned, and two more officers were shot. Gonzales took medical leave after the incident and then returned to the department in 2010. Gonzales drove himself to the hospital after being grazed by a bullet, and was also perhaps dealing with emotional stress.

Sergeant Gonzales has been named in multiple other lawsuits alleging wrongful death, excessive force, illegal searches and racial profiling. The city has paid out $3.6 million in these lawsuits.

Sergeant Gonzales was held up as an example of police accountability gone wrong, and the problems with the Copley Act in an article by Ali Winston.

In 2006, Sgt Gonzales was promoted, named to a “Crime Reduction Team,” made a firearms instructor and made the SWAT team.

In 2012, Gonzales was honored by the department for his handling of the Oikos Mass Murder.