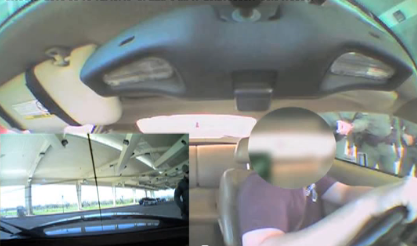 You may remember Rick Rynearson, who outfitted his Mitsubishi Eclipse with cameras and other technology after being wronged twice by unscrupulous cops.

On March 18, 2010 Rick was detained by strangers at a checkpoint in Uvade, Texas, on a road that never passed the magic line called a political border. He filed suit seeking accountability for the unjust detainment he was subjected to for 34-minutes, which was ruled against and he’s now moving forward with an appeal.

He did a thorough write-up about the incident, which was entirely captured by the cameras rolling in his vehicle and he’s now doing a donation drive:

Rynearson has funded this lawsuit, and another similar ongoing civil suit, entirely himself.  He is now appealing this civil suit to the Fifth Circuit Court of Appeals.  Even when this suit is eventually victorious, there is a real chance attorney fees will not be paid for by the government.  Those interested in helping defray the costs of this suit can donate here.  Any money not used for this litigation will be donated evenly between The Peaceful Streets Project, Photography is Not a Crime, CopBlock, and the American Civil Liberties Union (ACLU).  Thank you for any help you can provide!

If you’re interested and able, send Rick some coin via PayPal “lilryno@aol.com” to help with his appeal.

Recently, the U.S. District Court for the Western District of Texas in Del Rio dismissed a civil lawsuit, prior to discovery, against two Border Patrol agents on the grounds that the plaintiff did not demonstrate a violation of the Fourth Amendment to the U.S. Constitution and therefore the agents had qualified immunity against discovery or civil suit.

The plaintiff, Richard Rynearson, argued that a thirty-four minute detention for a suspicionless immigration inspection sixty-seven miles from the Mexican border violated the Fourth Amendment’s protection against unreasonable seizures.  Rynearson provided video of the encounter that shows he offered a driver’s license, a military ID, and two passports to the agents.  The video further shows Rynearson answered every question asked of him by the agents, with the exception of a single question concerning the identity of his supervisor at his place of employment (a question the agent told Rynearson he did not have to answer).

Still, the district court ruled that a thirty-four minute immigration detention was reasonable, and gave two separate arguments for its decision.

Below is the four-video playlist housed at YouTube.com/VAPAadmin that objectively presents an objective record. Rick certainly wasn’t in the wrong.

The first argument the court made in its ruling, was that Rynearson’s “own actions” caused the delay, and therefore this was a reasonable length for an immigration inspection.  Specifically the court ruled that Rynearson caused the well above average detention by 1) refusing to roll his window down during part of the detention, 2) refusing to physically hand his identification to an agent despite the agent not asking for the identification physically and despite the agent’s claim that the identification was “irrelevant” to immigration status, and 3) Rynearson’s “arguing” with the agent concerning the standard of suspicion required for further detetention and Rynearson’s challenging the agent’s claim that he could not hear Rynearson.  The court did not hold the agents responsible for their failure to ask a single immigration question until eleven minutes into the detention.  The court did not explain why a citizen suspected of no crime must legally roll a window down beyond what is necessary to verbally communicate (if at all), or why he must physically hand over identification without a clear request (if at all), or why protected speech to disagree with an agent removes the need for government agents to act diligently during a detention.

The second argument the court made in its ruling, was that the agents had reasonable suspicion for “some criminal activity,” and the court mentioned possible drug smuggling, alien smuggling, or “another possibility” that Rynearson was acting as a decoy for unidentified vehicle(s) behind him that might have been smuggling contraband.  The court lists the following to support its lonesome claim of reasonable suspicion for “some criminal activity:” 1) Rynearson not rolling the window down for part of the detention, 2) disagreeing with the agents about the applicability of mere suspicion and the claim they could not hear him, 3) making a phone call to his lawyer, his wife, the FBI, and the Border Patrol headquarters in Washington DC, 4) declining the request to exit the vehicle (a request and not an order according to the agent’s affadavit), and 5) not handing over his identification physically to the agent (despite the agent not requesting it be handed over and despite the agent claiming the identification was irrelevant to immigration status).  The court’s ruling makes no mention of the fact that the government itself did not claim the defendants had reasonable suspicion in its motion for summary judgment, nor does the court mention that the primary agent declared in a signed affadavit that “Mr. Rynearson’s detention was solely for the purpose of conducting an immigration inspection.”  The court does not relate that the primary agent said multiple times during the incident that he did not need reasonable suspicion, or that the agent told Rynearson that he had “mere suspicion;” a standard less than reasonable suspicion which is only applicable for checkpoints on the actual border.  The court makes no mention of the fact that Rynearson’s window was partially rolled down in the primary inspection area and yet the drug dog did not alert for drugs or hidden aliens.  The court also did not explain how a motorist who had installed five video cameras to record his actions in and around his vehicle, could be reasonably suspected of engaging in “some criminal activity.”

If the district court’s ruling is allowed to stand, the legal reality under that district will be that citizen motorists who are simply driving from one American town to another American town, who have committed no crimes and who are suspected of no wrongdoing at all, may be detained by the federal government for thirty-four minutes regardless of the abundance of (legally unrequired) immigration status proof they provide or their (legally unrequired) cooperation with questioning.  In short, if this ruling is allowed to stand, it will remove the protections of previous Fifth Circuit and Supreme Court case law, which requires that these suspicionless checkpoint stops be brief, be limited to the purpose of inquring into immigration status, and that they present only a “minimal intrusion” to motorists who are not suspected of any crime.  In addition, this ruling if unchecked, will encourage judges to invent “reasonable suspicion” out of thin air, using only guesses and hunches to list various possibilities of “some criminal activity,” even when government law enforcement makes no such claims itself. Rynearson will be appealing this ruling to the Fifth Circuit Court of Appeals in the hope of reminding the Border Patrol and the district court that its ruling in Machuca-Barerra still stands, and that suspicionless checkpoint stops are an exception to the standing rule of the Fourth Amendment and must not be operated in a fashion that treats motorists as though they are all suspected of “some criminal activity.”

The Legality of Suspicionless Checkpoints

1.  The United States Supreme Court has ruled on the constitutionality of these suspicionless checkpoints, in the 1976 case U.S. vs Martinez-Fuerte and City of Indianapolis v. Edmond.  The SCOTUS stated “It is agreed that checkpoint stops are ‘seizures’ within the meaning of the Fourth Amendment” and that the rule is “that a search or seizure is unreasonable under the Fourth Amendment absent individualized suspicion of wrongdoing.”  But the Supreme Court (despite two Justices dissenting) provided a limited exception to that rule allowing these non-suspicion-based checkpoints to operate on highways up to 100 miles from any border.

2.  The Supreme Court set the following limits for the stops permitted under this limited exception to the rule: suspicionless checkpoints must be “brief,” limited to the programmatic purpose of the checkpoint (i.e. inquiring into immigration status in the case of Border Patrol checkpoints) rather than being catch-all seizures, and must provide a “minimal intrusion.”  The Supreme Court wrote in Martinez-Fuerte:

Our prior cases have limited significantly the reach of this congressional authorization, requiring probable cause for any vehicle search in the interior & reasonable suspicion for inquiry stops by roving patrols. Our holding today, approving routine stops for brief questioning is confined to permanent checkpoints. We understand, of course, that neither longstanding congressional authorization nor widely prevailing practice justifies a constitutional violation…

3.  The Fifth Circuit Court of Appeals ruled in U.S. v. Machuca-Barerra in 2001, that a stop of “a couple of minutes” is “within the permissible duration of an immigration checkpoint stop.”  (A couple most often means two).  In that same ruling, the Fifth Circuit also stated that “Our decisions have held that police violated the Fourth Amendment by extending a stop by even three or five minutes beyond its justified duration.”

The reality is that the Border Patrol has strayed greatly from case law, and often is not interested in presenting a “minimal intrusion,” and especially not to those who exercise their rights.  The increasing reality is that these checkpoints are not limited to their justifying purpose of briefly inquiring into immigration status, and instead are operated as part of the war on drugs as much as (if not more than) they are used to catch illegal aliens who made it through the actual border.  Drug dogs are a staple at these checkpoints despite their inability to smell immigration status.  Unfortunately, the trend has been that courts have not required the government to follow the law, and often show deference to the actions of the government in cases that do not involve grave injury or death.  There exist perverse incentives that do not encourage government to follow the law, and instead encourage government actors to further infringe on the rights of ordinary innocent Americans.  We hope this appeal proves a counterpoint to that trend. The document below was originally posted to VeteransAgainstPoliceAbuse.org. It was downloaded and uploaded to Scribd.com/CopBlock

Here’s the video referenced in the first sentence of this post – Spy Car Protects Against Unscrupulous Cops.

I captured it when we first met in person in Austin, TX in July, 2012 at the First Annual Police Accountability Summit hosted by our friends involved with the Peaceful Streets Project.