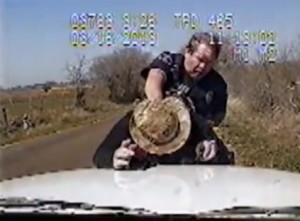 This is the complete footage of the illegal arrest of Army Master Sergeant CJ Grisham back in March 2013. While on a hike with his 15-year old son, Grisham was approached by Officer Steve Ermis of the Temple PD. When Ermis didn’t like the answer to one of his questions, he decided to take Grisham’s weapon without asking or notification. At no time did Ermis explain to Grisham that he was under investigation of any sort. At the moment Ermis grabbed his personal rifle, Grisham instinctively reacted by grabbing the weapon. This momentary reaction is what prosecutors claim “interfered with the duties of a public servant”. After the officer threw Grisham onto the hood of the car, still without explaining the charges against him or why he was being disarmed, Grisham refused to comply with orders to have his hands cuffed until he was certain he could get a record of the illegal arrest.

On November 19, 2013, a jury of six members found Grisham guilty of this Class B misdemeanor when they were not allowed to consider self-defense as a motive for his actions. The judge in the case, retired Harris County Judge Neel Richardson, was heavily biased in the case, calling Grisham and his family “local yokels” and telling prosecutors and defense attorneys that if he had his way he would “put them all in jail and teach them how to be good parents.” This explains why only 30% of his peers rated him an “excellent” judge in 2001, the year he retired.

In fact, in order for the county to secure their guilty verdict, they had to bring up this judge all the way from Harris County because no judges in Bell County would take the case. County Attorney Jim Nichols was rabid about finding any charge they could get to stick and then finding a judge that would go along with his efforts to protect an abusive police officer.

This video is time-sequenced. It begins with the dashcam footage from the arresting officer. The video that pops up to the right is at the moment Grisham turns on his camera to record, giving the view two points of view.

The third video is the dashcam footage of Sergeant Tom Menix, the supervisor for Ermis. Notice at 08 mins 08 secs when they go to the back of the patrol car that Ermis unplugs his microphone against TPD policy. This accounts for the terrible audio heard in the back of the car on Ermis’ dashcam, but the audio is still captured on Sergeant Menix’s microphone.

On November 19, 2013, a six member jury found CJ guilty of “interfering with public duties” and fined $2000. He is appealing the decision.

Please donate for the appeal at: http://selfdefensefund.com/donations/ or Paypal to cj@soldiersperspective.us.