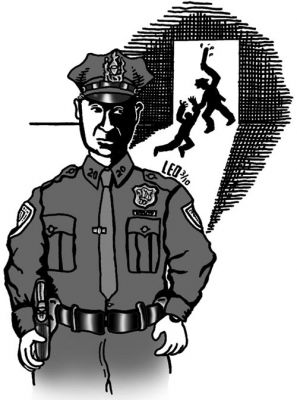 This first story comes out of Troy, New York. The police chief there has suddenly been put under investigation, after he revealed the results of an internal-affairs investigation into allegations of police brutality. The departments IAB found that an officer had indeed used excessive force when they struck a person in the head causing injury. The chief then related those findings to the victim. Although he recommended that the District Attorney’s office review the case to weigh criminal charges, he later informed the victim that administrative action was the only option left to take against the abusive cop.

So, what we see here is that even the commanding officer of a police agency cannot actually expect to hold his own subordinates accountable for violent crimes against citizens, and will face a political witch-hunt now for crossing The Thin Blue Line’s code of silence.

This next case is astounding, not because it’s so astounding that police would actually abuse their authority, but because of the sheer numbers in this one story alone.

Quickstop convenience store clerk Earl Sampson has been stopped and questioned by Miami Gardens police 258 times in four years. He’s been searched more than 100 times and jailed 56 times. He has been arrested 62 times for trespassing alone. But here’s the real kicker. Almost all of the trespassing charges stem from allegations that he was trespassing at the Quickstop where he actually works! He has not been the only victim of an incredibly overzealous police force either.

The owner of the convenience store decided to install a 16-camera surveillance system to protect his customers and employees from the cops, not robbers; he said that he has never been robbed. Numerous videos appear to show wrongdoing and profiling by police, including one clip where clerk Sampson was hauled off by police for taking a bag of trash to the container outside.

You can see the videos and read more at Miami Herald.

Finally, we have two ex-cops who have been arrested for murdering two Kentucky women in 1994. One of the cops was actually a detective who was in charge of the investigation, for a time, into the brutal slayings of the two young women who were working as prostitutes in a massage parlor. The two were shot in the head and had their throats slit. One woman had a baby who was just weeks old, who she had been nursing. Several years after the murders had still gone unsolved, allegations were made that the police had demanded money and sexual favors from the women. When they finally decided to no longer cooperate with the extortion, they were murdered to keep them quiet about police dirty-deeds.