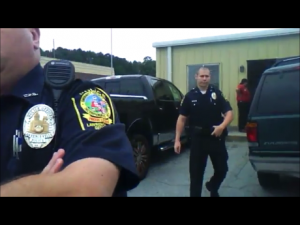 I have watched braver, smarter, and more articulate people than myself struggle against our oppressors and had done nothing. I first began to wake up to the abuses when I watched how the Occupy movement was being treated. They were unfocused, but not violent or disruptive. When they eventually came to Georgia, where I live, they were abused and shut down. My cowardice began to make everything taste bitter. I made a choice to pick one thing I could study and begin my fight against injustice. I chose the right to travel.

We have been brainwashed into thinking that the roads that we pay for in tax money are not ours. We are conditioned to think that the car that we have paid for with our hard earned money is just really rented from our government masters. My strategy is this: They coerce us to comply by seizing our time or assets; even if we win our cases against us, it has cost us our time or assets. A lesson to others to acquiesce. My plan is to bring this corrupt system down, to make them bleed. Why do you step on an ant and not a snake? The snake can bite.

The state gets a large portion of its revenue from traffic citations. Whenever they need quick cash, they squeeze us. If I can spread the word that we have a right to travel and we can fight and win, then we can make them bleed money. If we also bring lawsuits against individual police officers, judges and other officials that try to strip us of our rights, and force them into court and to hire a lawyer, then we have taken the fight to them. They will not be able to hide behind their office. The others who try to strip us of our humanity and freedom will be watching and know they will personally be held accountable.

I am trying to make people believe that if there is an abuse of their rights and they fight back, there may be some money in it for them. It may be worth the trouble. I have documented some of my traffic stops. As of now, I have not yet gone to court. I have discovered that they were ignorant of the argument for constitutional travel, but now they have developed a strategy against it. Instead of just giving a citation and letting you go on your way, they now hold you where you are, sometimes for longer than they can legally hold you, without arresting you, and have your car towed. If you park on private property where they have no right to tow and you try to stop them, the police threaten you with obstruction of justice.

I have written the Governor of Georgia and have gotten the answer that there is nothing he can do to defend our rights or the constitution. I ask that you please post my videos on your channel. I thank you for the good work that you do. You have made a change. I actually heard them mention you when I went to the courthouse to file some papers. They were taking signs down that said you could not pay fines in cash. This is against the Coinage Act of 1965, specifically Section 31 U.S.C. 5103, states: “United States coins and currency (including Federal reserve notes and circulating notes of Federal reserve banks and national banks) are legal tender for all debts, public charges, taxes, and dues. Foreign gold or silver coins are not legal tender for debts.” Once you were gone however, they have put them back up again. I have the URLs below. Know that you are not alone in your fight. You are doing things that have inspired others. Kids won’t dress up as you for Halloween, but you’re a more real hero than iron-man or superman.