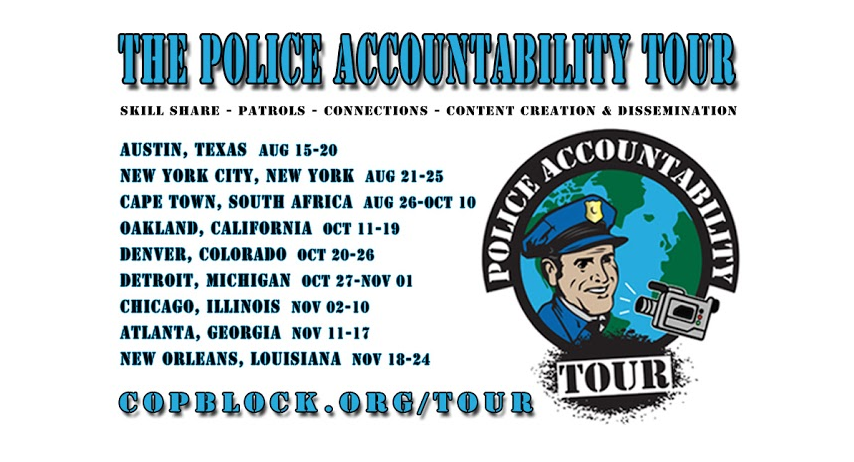 On August 15th, 2013, after being molested by a stranger without my consent, I boarded a plane in Manchester, NH and flew to Austin, TX, where, a few hours later, another plane in-bound from San Francisco, landed, from which longtime Copwatcher and documentarian Jacob Crawford exited – it was the start of the Police Accountability Tour.

In nine cities over the next three-and-a-half months content was captured and shared, and people were connected and collaborated with, around issues of police accountability, to together advance a reality free from institutionalized violence.

Jacob accompanied me for the first leg – after Austin we trekked to New York City, then Cape Town, South Africa, then Oakland – then I continued solo to Denver, then my bud Garret Ean joined me for the final four stops: Detroit, Chicago, Atlanta, and New Orleans. In total, we uploaded 47 videos to the Police Accountability Tour playlist and wrote a number of other posts, associated by city, at copblock.org/tourstops.

It’s been said that the camera is the new gun and I couldn’t agree more. The camera captures the truth, pure and simple. I could go on for hours about all the experiences had and still would only scratch the surface. Just one metric to consider – the many hours of content I captured was distilled down to one terabyte of .mov files, and ~135 gigabytes of .mts files.

Suffice to say, it was for me, productive and fulfilling, and I can say without a doubt that we, who know that badges don’t grant extra rights, are gaining traction. That isn’t exactly surprising, as accessibility to cameras and smartphones with streaming apps proliferate, and the censors of yesteryear loose their ability to control the conversation. Especially exciting is the synergy had as police accountability advocates of all stripes – whether active with an existing group or just now getting active – associate and work together.

True, one can’t point to a single metric to gauge the success or failure of the tour or of the broader police accountability movement, but the simple yet powerful ideas of ‘no victim no crime’ and ‘badges don’t grant extra rights’ resonate with more folks than do the bad ideas of double-standards and coercion.

Much love goes to those who helped make the tour a success, especially to Jacob, who brought his institutional knowledge (from whom I imparted much, including a simple, few-second tactic any police watcher should incorporate – panning down to show ones feet in relation to the police interaction being documented, to make it clear the distance and thus the non-intervention) and was never shy about questioning conventional paradigms, and who was key in the brainstorming and logistic stages. Also, to Garret, who brought his creativity and who doesn’t just speak about transparency but, perhaps more than anyone else I know, acts to make that happen by continuously filming and uploading.

Much appreciation too to all our friends who put us up (and put up with us!) when in town. With the exception of the six weeks spent in Cape Town – where we compensated the owner of the flat where we stayed for our use of the space and utilities – friends housed us, which made a tour of this magnitude much more feasible for cash-poor folks such as ourselves, and made for much more qualitative relationships on the ground as well.

Thanks too to everyone who helped offset tour-related costs, including many individuals and sponsors Amagi Metals, Free Keene, Freedoms Phoenix, Shiny Badges and Suns of Liberty Mint. I’m no accountant but after the many previous tours – Motorhome Diaries in 2009, Liberty On Tour in 2010 and 2011, and The Cop Block Tour earlier this year – I’ve realized the importance in tracking such figures.

To the best of my knowledge, the tour cost ~6,200FRNs (FRN = federal reserve note), with transportation (flights, diesel) accounting for ~50%, food accounting for ~44%, and ~6% going toward printing costs for literature, the animated map used in our intro video, the graphic used as a watermark on our videos, and harddrives to store content.

The tour netted ~2,100FRNs in donations, with ~52% coming from sponsors and ~48% from individual donations in-person and via wepay.com/donate/patour2013. Also received (from sponsors) was four ounces of silver and 2.25 Bitcoin, which, at the time of this writing, is worth about 80FRNs and 1,987FRNs, respectively. So, with the FRNs, and the silver and Bitcoin, the tour was donated ~4,167 total.

At this point, the ~2,000FRN difference between tour costs and tour donations has come out of pocket. I say “at this point” as the wepay.com/donate/patour2013 link will be active until December 31, 2013 and some may be inclined to donate. In retrospect, as is always the case with these ventures, it would have been good to start ironing-out logistics even earlier than we did, as that would have likely had a positive impact in this area – to reach out and get on the radar of more like-minded people, and perhaps accrue more sponsors.

Also, there was unfortunately other unexpected costs incurred during the tour – ~2,855FRNs to get work done on my Tahoe. It’s important to acknowledge that the vehicle is not used exclusively for Cop Block-related tasks, though, since I’ve owned it since July of 2012, it’s been used both for the Police Accountability Tour and the five-week, two-dozen city tour I did in January and February of 2013. And wherever it’s driven (or parked for that matter) it definitely helps to drive traffic to the site and gets people thinking as it has “CopBlock.org” emblazoned on the back and a thought-provoking statement on each side.

Stay tuned for more tour followups. Garret told me that he plans to write a post about his experience, and Jacob and I have talked about doing a joint piece to address bigger-picture issues that were seen or reinforced when on tour. And I’ll definitely be incorporating the content collected into future videos and may create more stand-alone videos of interviews with specific people and of different police interactions. I plan to spend December doing creative destruction – identifying strengths and weaknesses of copblock.org to buttress or create anew tools thought to create value, while disregarding those that aren’t our comparative advantage. I’ll definitely be soliciting input as I dig in, as the crowdsourcing approach is much more likely to create a bigger positive impact while at the same time strengthening the size, scope, and resiliency of this movement. In the meantime, feel free to provide any input you have about the tour or about copblock.org, and how it can become a better resource, via pete@copblock.org or, as copblock.org is decentralized, implement whatever you think worthwhile (so long as it doesn’t initiate force).

But enough text for now.