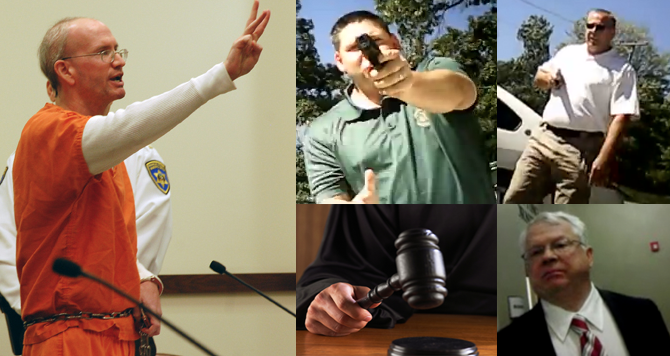 Pending appeal, Jeffrey Weinhaus, a 47-year-old proponent of governmental transparency, will be caged until he’s 72-years-old due to a conspiracy by some who subsist on theft and claims of double standards.

This past Monday – November 25th, 2013 – Keith Sutherland told Weinhaus he was to be caged for 30-years each for armed criminal action and assaulting a law enforcement officer (LEO), two years for felony drug possession and one year for misdemeanor drug possession – sentences that will run concurrently. (The assault on a LEO mandates that Weinhaus be caged for at least 85% of the time, hence the 25-years minimum Weinhaus is facing.)

Apparently Sutherland and his cronies – including Robert “Bob” Parks, who in an effort to silence Weinhaus, has for over a year has told half-truths, Henry “HJ” Folsom, who shot Weinhaus twice in the chest, once in the neck and once in the head on September 11, 2012 (perhaps after being nudged by the top-dog at the Missouri State Highway Patrol (MSHP)), Scott Mertens, who was present when Weinhaus was shot and who has thus far failed to speak out about the injustice, and their colleagues at MSHP’s Troop C, who’s “investigation” of the shooting was in name only – have no moral qualms railroading Weinhuas who, by working to identify and oust political misdeeds, acted more closely aligned with the oaths of office they swore to uphold than they do themselves.

Instead, Parks noted that, “I was very happy with the sentence” but “I would have liked to have seen consecutive sentencing because he did not show remorse.” Apparently Parks is well-versed in Orwell’s doublespeak. Why the hell should Weinhaus show remorse when he didn’t himself act in the wrong? Shouldn’t it be the perpetrators who are remorseful?

After Sutherland’s “kangaroo court”, Weinhaus rightly called Sutherland a “fraud”, likened Sutherland and Parks to “predators”, and Folsom and Mertens to “cold-blooded murderers”.

This situation is but another unfortunate example of someone being targeted for speaking the truth and questioning the statist quo.

The evils of tyranny are rarely seen but by him who resists it.
– John Hay

Weinhaus asked during legaland, “Why would [governor] Jay Nixon want to be concerned about me? Why did he want to eliminate me?” Perhaps because Weinhaus’ reporting – unlike that from the lamestream media – was getting too close to Nixon or his friends?

It certainly helped the “official” version of events that the “investigation” was handled in-house. And that the lack of rigorous reporting by self-described “journalists” only advanced the false story.

That investigation culminated in the confrontation at the MFA Station on Highway K south of St. Clair where the officers fired when Weinhaus went for a gun.

Huh? Did Weinhaus go for a gun? Of course that little fabrication is needed to dissuade questions about Folsom’s actions, but had Miller, Jones or Pruneau seen the video captured by Weinhaus’ watch camera or listened to the audio of the interaction transmitted from a cell phone in Weinhuas’ pocket and recorded by his ex-wife Valerie Weinhaus, they wouldn’t be so apt to unthinkingly parrot the scenario as framed by culprits.

That same inaccurate version of events – that Weinhaus went for his gun – was put-forth by Leah Thorson in stltoday.com:

… Troopers with the highway patrol’s drug and crime division met Weinhaus on Sept. 11, 2012, at a gas station on Highway K near St. Clair with a warrant for his arrest. Weinhaus reached for his pistol from a holster, and the troopers shot him, authorities said.

Further, consider how this unattributed post at Daily Journal Online is framed:

Jeffrey “Bulletinman” Weinhaus was sentenced to 30 years in prison this week for assaulting Missouri State Highway Patrol troopers moments before he was shot repeatedly during a confrontation with officers in September of 2012.

Sure, it seems pretty innocuous, but read again – the author claim that Weinhaus was “sentenced to 30 years in prison this week for assaulting…” – can an assault caused by Weinhaus be identified? Because one can certainly point to an assault – an almost deadly assault – against Weinhaus by those who wear badges on their costumes that caused him to be helivaced to a hospital.

And such a simplistic blame-the-victim framing of events by Vera Culley, over at Fox2News.com does nothing to dissuade the initiators of violence:

In an online video, Weinhaus said he had the right to shoot corrupt officials. When troopers went to arrest him, they say he reached for a gun, so they shot him.

Can Culley point to a video clip to support her claim that Weinhaus made such a statement? Also, Culley completely fails to include pertinent information – such as the fact that shooter Folsom told Weinhaus that at the September 11, 2012 meeting, that Weinhaus was to receive back the computers he and his colleague Mertens had stolen? Also, the fact that the watch camera video shows both Folsom and Mertens not only had reached for their own guns but had them drawn and pointed at Weinhaus seconds after Weinhaus existed his vehicle? Not to mention the fact that – according to witnesses, Weinhaus never reached for his gun? (Missouri is an open carry state – Weinhaus was completely in the right carrying.)

Fortunately, some following the treatment of Weinhaus did think for themselves, including David George Baugh, who wrote in an editorial to The Sullivan Independent Press:

The police actions against Jeffrey Weinhaus reek in the stench of tyranny and oppression evidencing that Missouri government has become a socialist police state of fascist feudalism, ruled by absolute despotism! Sadly, as the jurors showed, they all have forsaken their liberty & freedom and that of their fellow man for the false safety & security of the police state

I may not agree with what you say, but I will defend to the death your right to say it.
– Voltaire

Hopefully an appeal will bring about a better conclusion.

UPDATES WILL BE ADDED TO copblock.org/jeffreyweinhaus.

When this post was made live (2013.11.29 10am CST) the Missouri Department of Corrections does not list the whereabouts of Weinhaus. Once that changes his address will be shared for those inclined to reach-out.

Weinhaus can receive mail at this address:

A couple video updates about Weinhaus’ situation made the day he was sentenced and the day prior to his sentencing: