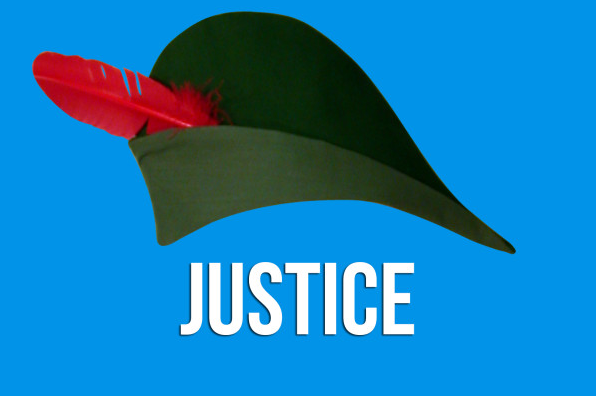 The text below, originally posted to FreeKeene.com, comes to us from Ian Freeman:

Robin Hood and the Merry Men and Women are victorious over the lying, corrupt “City of Keene” in BOTH Robin Hood cases!  The first civil case was filed by “the City” back in May seeking a preliminary injunction against the six named respondents, in hopes banning them from being near, speaking to, or recording video of the parking enforcers.  It was heard over three full days of court “evidentiary hearings” later in the summer and afterwards, heroic free speech attorney Jon Meyer filed a motion to dismiss the case.

Attorney Meyer’s motion has now been granted in a 17-page notice of decision from Cheshire “superior” court judge John C Kissinger Jr., which also dismisses the second civil case against us that was filed by “the City” in September,  seeking monetary “damages”.  The second suit proved what we all knew and the city people had originally denied with their first lawsuit – that ultimately this was about their lost parking revenue.

Ultimately, the Robin Hooders have been completely vindicated.  The city people were lying (as is typical of governments) when they claimed Robin Hooders were harassing, intimidating, and threatening their parking enforcement agents.  Again, the proof that they were lying is that no Robin Hooder has ever been arrested for “harassment”.  Even if Robin Hooders were saying nasty things (no evidence of that was presented in court, and I’ve never seen it happen), the job description of the parking enforcers makes it clear they must put up with “mental and verbal abuse” from members of the public.  The city people tried to illegally oppress our right to free speech and to hold government agents accountable for their actions, and the court made the right decision and dismissed their frivolous, aggressive, unconstitutional cases against us.

In the notice of decision, judge Kissinger notes that the free speech rights of the Robin Hooders outweigh all of the claims of “the City”:

The Court agrees with the Respondents that their free speech rights under the First Amendment of the Federal Constitution will be violated by permitting the City to move forward on any of the claims in this action or the more recent action or by granting the requested preliminary and permanent injunctive relief.

In the rest of the notice, Kissinger defeats the ridiculous claims of “the City”, rejecting the claim of “tortious interference”, denying their request for an injunction, and dismissing the second suit for damages from “intentional interference with employment contractual relations and negligence”.

Will “the City” appeal the case to the supreme court?  Given their past history of blowing taxpayer dollars on frivolous appeals, there is a good chance they will.  They don’t know how to handle taking “no” for an answer.  Speaking of wasting your tax dollars, we’ll be digging into the financials of this case to see just how much was spent hiring their fancy private attorneys to handle the Robin Hood case.

Meanwhile, Robin Hooders are still on the streets of Keene, saving countless motorists from the aggression of the parking enforcement bureaucracy!  We won’t go away until they do.  So far, one enforcer quit over the Summer.  Will the remaining two follow suit?  Will “the city” be able to find anyone willing to fill the empty position?  Will they come up with some ridiculous ordinance against Robin Hooding?  Stay tuned to FreeKeene.com for continued updates on the Robin Hood saga.