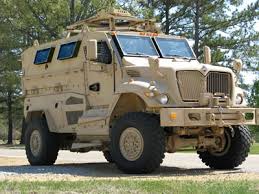 Can You Stop The Government MRAP Deployment?

Note: The following is for educational and entertainment purposes only. These tactics are merely speculative and not meant to be exercised in any manner.

The Department of Homeland Security, along with over 2,700 law enforcement agencies across the United States of America have acquired Mine Resistant Ambush Protected (MRAP) Vehicles. These are vehicles designed to be used in places like Iraq and Afghanistan, where IED’s are commonly deployed in an attempt to kill US military personnel. I do not know why law enforcement in America need these vehicles, designed to resist explosions, bombs, fire, and can withstand fifty caliber bullets. There are gun and gas ports on these vehicles allowing operators inside to discharge weapons, deploy chemical agents, a turret on top to control automatic weapons that will lock on approaching targets automatically and destroy them. The ultimate question becomes, why does law enforcement in America need MRAP’s? When was the last time an IED was used in this country on a police vehicle? Why the need for the deep V shaped hull and explosion resistant, run flat tires? Why the need to carry eight armed operators inside? What is it our law enforcement agencies in America have planned for the citizens? See the map and ask your local officials who they plan on attacking with this vehicle, as it is not for protecting and serving the public.

Militia groups, neighborhood watch groups and people seeking to live free and throw of the chains of tyranny need to see the signs of the militarization of their police force and realize that MRAP’s are not for drug raids and crack heads, they are designed for the person with the Gadsden Flag, the NRA sticker, those silly notions about liberty, freedom, the Constitution and thinking for themselves. You will conform. You will believe. And, if you don’t, you better know how to stop an MRAP because it is not easy. They grease the axles of these things with terrorists around the world. Innovative American Freedom Fighters must be creative, active, vigilant and be willing to go as far as they must. Remember, one man’s terrorist is another man’s freedom fighter.

No matter how good you are with the Poor Man’s James Bond or the Anarchist Cookbook, no matter how big a batch of homemade C4 you can cook up with Vaseline (Known in Germany as Veenerslicker) and match head paste, Caro Syrup and Moth Balls, the odds are not in your favor that you will damage an MRAP. Due to the superior armament, the ability to deploy operators, chemical agents, and bullets, other methods of managing MRAP’s must be identified and used.

The MRAP has a very high center of gravity and is prone to tipping. Well-disguised pitfalls (holes in the ground that are disguised) are very effective if done right. Due to the size of an MRAP the minimum size of the hole should be 18 x 8 x 4 and if covered with a desert camo tarp and dirt, attached to a thin PVC frame, when you lead the MRAP down the road, and it hits the pitfall, the V hull will cause it to roll to one side, preferably the right side, putting the driver in the air, partially pinning the door in the rear as an exit. Snipers, set up in advance, can use suppressing fire at points of exit, to gain surrender and submission of prisoners, without having to further injure fellow Americans.

Luring the MRAP with a decoy vehicle your band of merry freedom fighters can use a variety of methods, but they all end tipping the MRAP. Get the MRAP to pursue a bait car, lead them to a confined spot where the bait car can slow at a blind alley/street/building and allow for a forklift or semi mounted with the lift/hitch used for hauling manufactured homes (modified with a fork or forks) or a crawler commonly used in the manufactured home industry, to engage the target from the side, turning it turtle, using gravity as a weapon, by lifting the near side and dumping upon the far side. Once again, sniper teams can engage as occupants attempt to exit, allowing for capture without injury, so that operators can be interrogated later (a subject that will be covered in great detail in an article to come later).

Using heavy equipment, open/visible pitfalls, trap the MRAP, be creative, drop a concrete block behind it, whatever it takes, pin it in place, then make life uncomfortable for the occupants inside:

1. Deploy sniper and counter sniper teams.
2. Open any hydrants around the MRAP, flooding the street.
3. Drop power lines upon the MRAP & water.
4. Snipe the air tanks that control the devices that aid in opening the doors.
5. If they won’t surrender, light a flare, drop it in the fuel tank and walk away.

Before you attempt to take down an MRAP during a time of tyranny, when the government has come for us – all of us – there are some simple rules that must be adhered to: Anyone you don’t know is a cop, all phones are monitored, all electronic communications are monitored, and always look up. When you deploy, first deploy sniper teams and counter sniper teams, not for MRAP’s but for drones. The eye in the sky will betray you if you do not get to them first.

Be safe. Enjoy. And, know that this is all in fun. Unless the government deploys MRAP’s and attacks the people, then it isn’t.