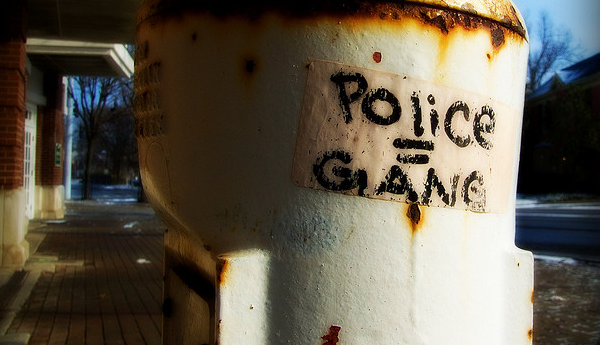 The text below was written by Jeremy Weiland and posted on 2013.06.19 to SocialMemoryComplex.net. The pictures were added by this editor.

Weiland’s prose is shared here in an effort to cause readers concerned about police brutality to  consider how safety and protection could be provided without the double-standards inherent in today’s institutionalized provision.

What I’m about to say may surprise you, but I assure you it’s the honest truth: in my personal experience, cops are overwhelmingly decent folks. They almost always conduct themselves “professionally” and have generally treated me with respect. I’m not saying stories of law enforcement abuse haven’t affected me–they absolutely have, and I’ll get into that. I’m not saying my arsenal of privileges haven’t colored my experiences. But as far as my personal dealings, I’ve encountered very few who were anything but by-the-book and courteous.

Because they are so frequently decent, I’m sometimes tempted to reconcile the profession of policing with the kind of free society I dream about. After all, I have several friends and family who are police officers, and I’m loathe to let ideology darken my opinions of them as individuals. I want to believe policing is possible outside the hegemony of a state, and that these people can be meaningful participants in a stateless community.

But I never persist in that belief very long. I cannot think of any acceptable justification for the existence of law enforcement as an institution at all. The entire enterprise is abominable, root and branch. There is no escaping the conclusion that, everywhere they exist, police are mercenary occupiers serving a power hostile to the authentic human flourishing. As I intend to show, so long as our society exhibits privilege and injustice, I cannot pretend law enforcement does not prop it up in some fundamental manner. It is the transformation of the function of policing into a profession that chiefly offends me. It’s as ridiculous as professionalizing the role of the voter in a democracy. I’m sure contractors or bureuacrats could devise a way to vote more efficiently than any of us flesh-and-blood folks can, but wouldn’t that defeat the point? It’s crucial to a democracy that everybody vote; it’s what makes it a democracy (putting aside whether such formal democratic governance is desirable).

In the same way all eligble members must vote in order for a democracy to be most legitimate and authentic, being a member of a free, self-governing, non-authoritarian community necessarily entails policing on the part of every community member. After all, more is implied by “community” than mere proximity of domiciles. Rather, communities should comprise a population unit bound by shared values, a coherent body brought together and made distinct by the identity emerging from individual lives. When you surrender using coercion as an organizing principle, what other basis is there for collectivity?

These shared values do not ensure there will never be conflict, or even that these communities will always work. They do, however, ensure that the costs, side-effects, and consequences of that community’s values will be legi

ble to the people themselves. If you want racism in your community, well, you’ll have to do the dirty business of pushing around people yourself–no passing laws and hiring cops to do it for you. If you want to enforce unequal distribution of wealth, you can’t hire goons to keep your neighbors fenced off in squalor. Whatever problems face the community, at least the community cannot ignore them.

Professionalizing the policing of communities encourages people to promote values–such as through monopoly law–without fully internalizing the costs of doing so. These costs accrue not just monetarily; they are costs incurred through inconvenience, through mental calcuation, averting one’s eyes, and psychological coping, through the inalienable duties of community membership, through the inability to simply ignore the reality of your fellow man. If you outsource this, you don’t just concentrate power in a class of people with obscene incentives to abuse it. You also outsource your ability to learn whether or not your community actually functions at all. And you will be hostage to the police because you’re afraid to fully accept and participate in the consequences of your way of life. Shouldn’t that tell you something about your community? I don’t understand why anarchists of all stripes underemphasize the degree to which anarchism is necessarily incompatible with mediating institutions like the police. It seems to me that speaking only of what people can expect to get from a stateless society smacks of typical individualist myopia. Abolishing constituted authority confers the duty to regulate and manage personally, relying on everybody to step up and do their part.

You can’t hold the responsibilities of human freedom without unfiltered, direct information about the conditions under which that freedom exists. To be free in a particular context must entail an awareness of that particular context. Anarchism, sans ideology, is ultimately about being present, directly experiencing the collective reality, noticing the fluid conditions that are equally capable of frustrating and liberating us all. Any political principles following from that approach downright empirical facts.

Anarchism prefigures a world in which people go about human business in all its facets, without mediation or privilege. Self-government doesn’t merely devolve the operations of governance, such as the parliamentary or legal, to the common man. It changes the nature of what we mean by government, transforming it from a formality of institutions running parallel to society into a day-to-day individual duty, a constant creation of and reaction to society, not in spite of the people’s confluence and conviviality but as its logical product.

We find ourselves held hostage by police and their increasing demands for more intrusive, more arresting, more egregious domination because we know our communities cannot work on their own. So we put up with the arrogance, the abuse, the concentration of unaccountable power. In addition to pointing out the evil and error of this situation, anarchists must stress that it is also an abdication to the state of the very essence of our social nature. A police force tangibly represents the abandonment of community, a clue that the collective values of the population do not align with the lived reality.

A community doesn’t require guards wielding lethal force to maintain itself. It doesn’t have to protect those with more privilege, power, or wealth from those with less. The very fact that you have to constantly protect power and privilege in first place, let alone do so by hiring the goon squad, tells you whatever arrangements you wish to protect are artificial, illegitimate, and unsustainable. If community wealth is imbalanced, of course you will have crime. If you have a subclass of people who are disrespected consistently by the others, of course you will have violence. If you refuse to engage directly with your neighbors, of course you’ll need an armed mediation squad to protect you and yours from them and theirs. And if your reaction to the messy business of human beings is to wall yourself off from them with a professional cleanup crew, mopping up the trail of blood and pain your chosen existence creates, of course it will persist. To solve a problem you must first face it.

The police don’t create injustice, inequality, suffering, poverty, and crime; those things will probably happen anywhere to some degree. All that police do is maintain the status quo that allows these things to continue and intensify, protecting business as usual from them. “Bad people” exist, but I see no evidence that the police has some sort of unique ability to identify them, so prevalent are they in the halls of power (and donut shops).

By sanitizing the problems our laws, practices, and values create for us, they make our collective dysfunction possible. We don’t need to actually respond to the damage we cause; we just pay to have it managed for us, and this default attitude enables many of the intractible, ongoing crises of modern life because the community’s fluid, adaptive nature has been denied. The police allow us to pretend this constant failure of humanity is just the way the world is, instead of what we ask them to institute as an alternative to facing it head on.

It’s like a town living behind a dam that can’t hold; every time it floods, the solution is a bigger, better, more expensive dam, instead of just moving to a place that doesn’t require a dam. Similarly, it’s as if the police manufacture the community’s need for their services, with our all too frequently enthusiastic blessing. While I criticize the individuals who choose the crappy profession of law enforcement for not self-regulating more, I’m sympathetic to their predicament to defend an indefensible and unsustainable order. There’s no way to do it but with brutal violence, ubiquitious threats, and raw, unaccountable power.

Professional police create the illusion that we can be passive consumers of government. Law enforcement is the indispensible institution of the modern state, the fulcrum of authoritarianism in our society. The honest anarchist intuitively recognizes this, but may not realize that any future stateless society with a professional police class will inevitably end up as bad or worse. When it comes to anarchism, you cannot alienate your agency to personally produce the society you wish to participate in.

The only alternative to hierarchy, authority, and privilege is to reclaim our inalienable duty to be the police ourselves, to be members of a horizontal community, to be the exemplars of the values we claim to hold dear, and to face danger and suffering squarely. Anything less is nothing but an amusement park, a simulcrum of community that sells us tickets to a cage. That kind of farce has nothing to do with the anarchist project, which concerns humans and the communities that emerge from their congress.

Jeremy Weiland lives in Richmond, VA with his wife Tasha and their beagle Freddie. He writes software for a living and is active in radical politics. Other passions include music, backpacking, barbeque and the contemplative life.